Empanelled drivers may steer away from booths

THIRUVANANTHAPURAM:  If a big section of the electorate is looking forward to the big day when the state goes to polling booths on Tuesday, a minority wish the day would be ages away. With just four more days left for elections, the KSRTC empanelled drivers are unable to steer clear of despair and anxiety.
The High Court wants as many as 1,565 empanelled drivers to be relieved from the Corporation before April 30. The final word will be out any time after the elections. 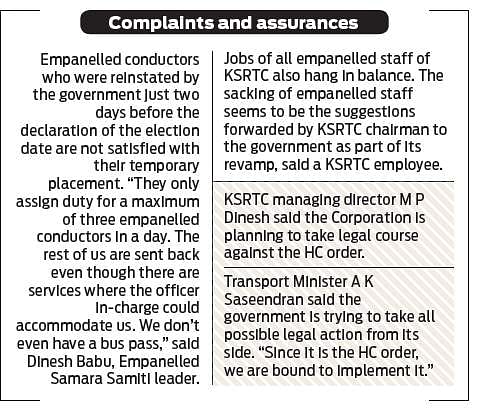 “My name was in the PSC rank list but as it got cancelled I have been an empanelled driver for the past nine years. There is no PSC list existing at present for drivers. It is all but a planned move by the government and the Corporation to remove us.

“I will stay away from casting my vote,” he said. Already around 2,000 KSRTC buses are lying idle at various depots. The HC decision to sack the 1,565 empanelled drivers will affect the services that will take a toll on the commuters.

“During the earlier crisis when the empanelled conductors had to be terminated, the KSRTC roped in drivers and mechanical staff to fill the shortage and ran services without much disruption. But a temporary remedy is not possible as driving a bus without licence or handing over the vehicle to any inexperienced staff may only lead to accidents,” said city depot driver Suresh Babu, who has also decided not to exercise his franchise.

Now we are on Telegram too. Follow us for updates
TAGS
KSRTC conductors