The pollscape in Kerala has evoked national attention, thanks to Congress president Rahul Gandhi’s candidature from Wayanad and the Sabarimala issue.

THIRUVANANTHAPURAM: Kerala will go to the polling booths of 20 constituencies on Tuesday in the third phase of the Lok Sabha elections in what is touted as a decisive mandate for all three fronts. As many as 2.62 crore voters will exercise their franchise to elect their representatives from 227 candidates, with the state hoping to improve on its 74.02 poll percentage last time.

The ruling Left front and main opposition UDF, engaged in a fierce battle, are determined to make it big, while the NDA, riding on the Sabarimala wave, is keen to alter the state’s bi-polar trend. At least a couple of constituencies are witnessing tough three-cornered fights, with the BJP raising a formidable challenge and giving the NDA the hope of winning a seat in the state for the first time.

The pollscape in Kerala has evoked national attention, thanks to Congress president Rahul Gandhi’s candidature from Wayanad and the Sabarimala issue.

All three fronts want an increase in voter turnout. Rain forecast for Tuesday in the southern districts is a cause for concern for the party workers as all of them say it could upset their plans. 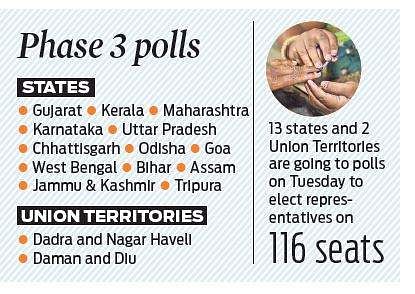 Now we are on Telegram too. Follow us for updates
TAGS
Lok Sabha Elections 2019 Kerala