KOCHI: Many voters, including Chief Minister Pinarayi Vijayan, had a harrowing time on Tuesday, waiting additional hours for casting votes as the electronic voting machines (EVM) malfunctioned in many constituencies in the state. Many polling booths, from Kasargod to Thiruvananthapuram, reported faulty EVMs causing disruption to voting.

In many polling stations, Voter Verifiable Paper Audit Trail (VVPAT) machines also developed snag resulting in delayed polling. The Chief Minister had to wait for over 30 minutes in queue at Pinarayi RC Amala Basic UP School after the EVM stopped functioning. He accused the election officials of not showing seriousness in preparing the machines for the big occasion.

ALSO READ | Faulty EVMs: After waiting for an hour Cardinal Alenchery leaves without casting his vote

In many places in Kannur, the voters had to return disappointed as they could not cast votes. At booth no 147 in Cheleri Karayaappu, voters complained about VVPAT displaying the symbol different from the one they had pressed in EVM. The glitch was brought to notice after around 70 voters had cast their votes. The polling restarted after installing a new VVPAT machine.

In Kasargod, polling began late in 16 polling booths following malfunctioning of EVM and VVPAT machines. Only three booths reported faulty EVMs in Wayanad, while EVM failures were reported in 90 polling booths in Vadakara, where one booth reported EVM malfunction for four times. In Thrissur, polling was delayed in many booths due to power failure and faulty EVMs. Officials said the delay in receiving standby machines caused further delay in resuming the polling at many places.

Areas, where maximum machines failed, were Arimboor, Kundukadu, Kuriachira, Olakara, Ayanthole and Edavilangu. Disruption in power supply following heavy rain on Monday night resulted in many booths functioning without proper lighting. In Palakkad and Alathur, polling was delayed in a couple of booths. At RVLP school in Kayiliyad, where LDF candidate M B Rajesh was to vote, two EVMs had to be changed as both of them developed a snag causing a delay of two hours for polling to begin. 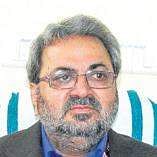 ‘219 EVMs developed snag’
T’Puram: Chief Electoral Officer Teekaram Meena said 219 Electronic Voting Machines developed snags across the state. However, compared to the national average, the number was less in Kerala. About 190 Control Units also developed complaints, he said. Expressing satisfaction over the performances of the machines, Meena added that out of 40,000 VVPAT machines, only 500 reported technical snags. “One to three per cent of the machines developed a snag. The national average is four per cent,” he said.

Lotus lights up as ‘hand’ button is pressed: UDF
T’Puram: The UDF workers on Tuesday morning alleged whenever someone pressed the ‘hand’ symbol of the Congress candidate, the light against the BJP’s lotus symbol flashed at the booth no 151 set up at the Madhava Vilasam School, near Chowara, in Kovalam. They said malfunction came to notice after 76 persons polled the votes, forcing the workers to lodge a complaint. The election officials then stopped the polling for about one hour and checked the machine. Later, they clarified there was no such malfunction as alleged. But the officials said some of the buttons in the machine were not working in the morning allegedly due to the moisture in the atmosphere. Later, the officials replaced the machine.

Case against youth for misleading officials
T’Puram: In another incident, the police have registered a case against a 21-year-old youth in Thiruvananthapuram on charges of misleading the officials by raising a complaint that the EVM in which he cast vote recorded the vote for a wrong candidate. The officials inspected the machine and confirmed there was no issue as complained by the youth, who was identified as Abin who cast his vote at booth number 151 in Pattom Kendriya Vidyalaya in Thiruvananthapuram. The police registered the case based on the recommendation of the officials as the allegation he raised remained unproven. However, he was let off by the police upon furnishing the security for the station bail.

In another incident, a voter was arrested for challenging the presiding officer for the anomaly in EVM at Panmana in Kollam district. Shamnad of L K Mansil, Porukara, was arrested after he could not prove his allegations on EVM at a polling booth in Chittoor. “He said VVPAT showed sign of a candidate different from his choice. But he could not prove it,” said a police officer. He was later released on bail.

Snake spotted inside VVPAT machine
Kannur: Polling was held up for some time at booth number 145 at Kandakkai ALP School,  near Mayyil, on Tuesday morning after a snake was found inside the VVPAT machine on Tuesday morning. It was during the mock polling that the officers spotted the poisonous snake. The unusual incident caused panic among the voters and officials, delaying the polling for around half an hour. However, the snake was soon removed and voting resumed.

UN: Over 270 migrants rescued and detained in Libya