Thiruvananthapuram, Pathanamthitta, Thrissur and Palakkad constituencies have witnessed record turnout compared to the turnout in the last two general elections.

THIRUVANANTHAPURAM: The relatively higher turnout in the four Lok Sabha constituencies which witnessed a triangular fight and the increased women participation kept the candidates of two leading fronts in the state on their toes, although the Sabarimala factor is expected to raise the stakes for the BJP candidates in the constituencies that witnessed the triangular fight.  Further, the increased turnout of women in the elections forced the political parties to keep their fingers crossed as they are still clueless how this would affect the poll prospects of candidates this time.

Thiruvananthapuram, Pathanamthitta, Thrissur and Palakkad constituencies have witnessed record turnout compared to the turnout in the last two general elections. Thiruvananthapuram, which witnessed 73.26 vote per cent this time, had recorded a turnout of 68.69 and 65.74 per cent polling in 2014 and 2009, respectively. 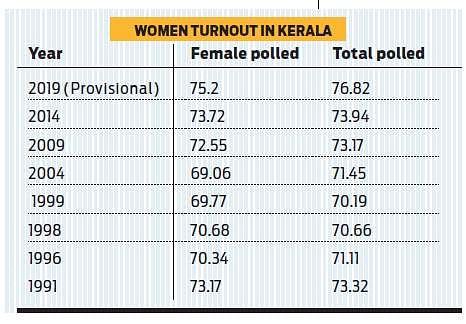 When it comes to women participation, there is all chance for this election to be a milestone in the poll history of Kerala since 1990. As per the provisional stats released by the authorities, the female participation is around 75.2 per cent (provisional), the highest after 1991.

These trends clearly indicate the voters in some of the constituencies which witnessed the triangular fight have clearly been influenced by the vociferous campaign over Sabarimala. According to poll pundits, though the triangular fight has somewhat helped the Left in the last Assembly elections, this time it would badly prove costly for the Left at least in four constituencies.

Speaking to Express, political analyst and former MP Sebastian Paul said according to the provisional stats of the general election, there is a clear increase in female participation in this elections. The increased eagerness showed by the elderly women in this election underscores that there has been a clear swing in the mood of these women, which is as of now unpredictable for the both LDF and UDF fronts, but somewhat ostensibly favourable for the BJP-led NDA in some constituencies, he said.