The high-pitched electoral battle in the state was expected to bring some cheers to the tourism sector with Kerala hogging limelight nationally.

THIRUVANANTHAPURAM: The high-pitched electoral battle in the state was expected to bring some cheers to the tourism sector with Kerala hogging limelight nationally. However it didn’t evoke the expected enthusiasm among the tourists as the tourist footfall in Kerala was relatively low in the first month of the vacation owing to various reasons including the exorbitant air fares in the domestic and international sector as a fallout of the ban on the Boeing MAX aircraft coupled with the grounding of Jet Airways planes and the cancellation of flights of Indigo due to pilot shortage.

E M Najeeb, south India regional chairman of Indian Association of Tour Operator’s (IATO) told Express: “The exorbitant airfares played the major spoilsport in the beginning of the vacation as the two and three fold airfares have literally poured cold waters on the holiday plans of the tourists. If there is a moderate or good monsoon without any untoward developments, the wellness sector will receive some inflow of tourists, while the sector will be back on the track only by the September-October period, he said.

However, Jose Pradeep, secretary, KTM, says the sector had picked up momentum after the general elections in Kerala and there was a steady flow of domestic tourists from northern India to the state. However, he is apprehensive of the prospects in the wake of the serial blasts in Sri Lanka and subsequent security alerts sounded in Kerala and other neighbouring states. “It was really a good week for the industry after the election. But the security alert sounded has cast a shadow over the prospects of the sector. If there is no major development in the next month, the sector will be riding high on the buoyancy of the domestic arrival,” he said.

Compared to the season in the past two years, this year domestic and global tourist footfall was very low in April. But May is looking good on an expected momentum 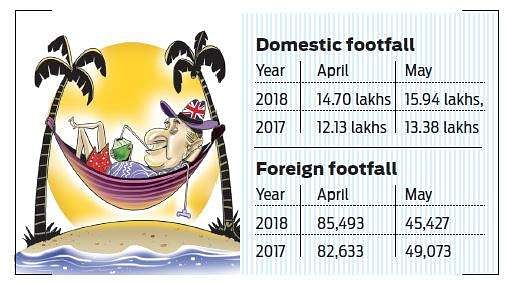 Now we are on Telegram too. Follow us for updates
TAGS
electoral battle