Eightfold spike in crimes against children in a decade

The depths of depravity also resulted in cases relating to rape of children witnessing a fivefold increase in the last 10 years, show statistics

THIRUVANANTHAPURAM: Despite punitive laws for dealing with perpetrators in child sex abuse cases, crimes against children have increased nearly eightfold in the state over the last one decade.Compared to the 549 child abuse cases registered in 2008, their number jumped to 4008  in 2018,  police statistics revealed. The depths of depravity also resulted in cases relating to rape of children witnessing a fivefold increase in the last 10 years. The number of cases crossed the four figure mark for the first time in 2011 when 1,452 cases were registered. However, murder of children came down from 37 in 2008 to 22.

In 2017, 3,543 cases pertaining to various forms of offences committed on children  were registered in the state. There was a year-on-year increase of 500 cases in 2018, with 185 abduction cases also registered.
Three suicide abetment cases too were registered. Cases were registered  under Prohibition of Child Marriage Act in connection with the 15 child marriages  conducted in 2018. Charges were framed in two cases relating to procuration of minor girls.

Meanwhile, the police say the spike in the number of cases in a way reflects the police’s efficiency, with more such instances being reported to the authorities. “More and more people are now coming forward with complaints unlike in the past,” said a senior officer.

“The people are aware of the legal aspects and do not shy away from filing cases. Earlier, this was not the case. The parents are so alert that even the excessive corporal punishment meted out to  children are immediately reported to the police,” he said.

However,  he did not subscribe to the view the spike in the number of cases indicated   children in Kerala are far more vulnerable to abuse.“That’s a thoroughly wrong impression. If you look around, most of the people are not even aware that there are rules  exclusively governing issues concerning children. Here in Kerala, there is increased legal awareness and the police are alert. This translates into more number of cases,” the officer said. 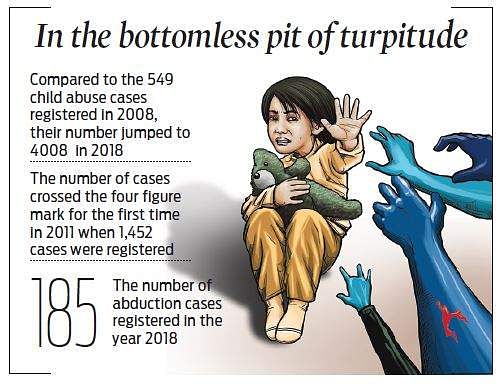 Now we are on Telegram too. Follow us for updates
TAGS
child sex abuse