The searches at the homes of Ahamed Arafat and Aboobacker Siddique went on till noon.

KASARGOD/KOCHI: The National Investigation Agency (NIA) raided the houses of two people in Kasargod and one in Palakkad on Sunday over suspected links to the Islamic State (IS).The raids in the houses of Ahamed Arafat of Kaliyangad and Aboobacker Siddique of Nainmarmoola started at 6 am and lasted till noon, said an officer.

The two — said to be in their late 30s — are suspected to have followed (IS) operatives including Zaharan Hashim, the alleged mastermind of Sri Lanka blasts, on social media, the officers said. During the search, a number of digital devices including mobile phones, SIM cards, memory cards, pen drives, DVDs of preacher Zakir Naik besides untitled DVDs, CDs with religious speeches, books of Naik and Syed Kutheb as well as diaries with handwritten notes in Arabic and Malayalam were seized, said an NIA statement.“Digital devices will be forensically examined and analysed,” it said.

After the raid, both were asked to be present at the NIA office in Kochi on Monday. According to the NIA, the names of Aboobacker and Arafat cropped up while interrogating Shaibu Nihar of Koduvally, accused of being an IS sympathiser. He was arrested from Qatar with the help of the Interpol.“Aboobacker and Ahamed will be interrogated on the basis of information provided by Shaibu. We suspect they maintained ties with the online handlers of the IS,” said an NIA officer.

Express had reported that nearly 60 Keralites were under scanner after the IS released a video in Malayalam and Tamil claiming responsibility for the terror attacks that killed 350 persons and left at least 500 wounded.

The Malayalees from Vandiperiyar, Perumbavoor, Thrissur and Palakkad allegedly attended the meetings organised by Towheeth Jamaath in 2016 at Madurai and Namakkal, said the report. After the blasts, Sri Lanka banned Towheeth Jamaath.

The videos on teaching by Zaharan were widely circulated among the youth through social media platforms in Kerala and Tamil Nadu, but were taken off after the blast, NIA officers said.Investigation into IS cases registered in south India revealed that radical teachings of Zaharan were followed by IS sympathisers. “Whether they had any direct connection with Zaharan has to be probed,” an officer said.In an official statement, the NIA said these persons were suspected to have links with some of the accused persons who had left India in 2016 to join the IS. 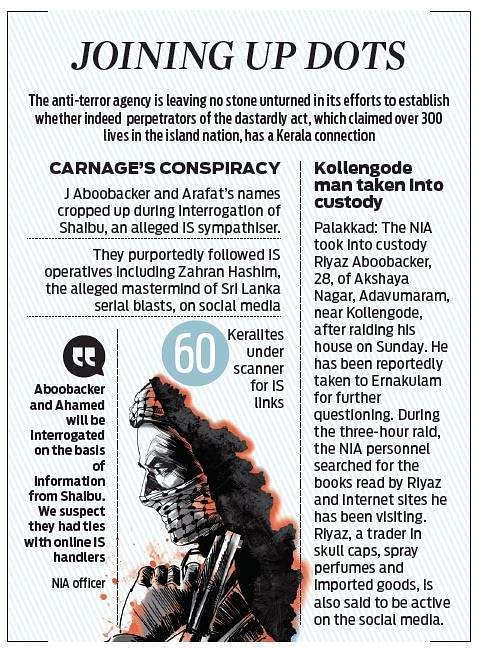 Now we are on Telegram too. Follow us for updates
TAGS
Islamic State National Investigation Agency