Thousands of pensioners feared left out of health insurance scheme

Thousands of pensioners are feared to have left out of the government’s flagship health insurance scheme for state employees and pensioners.

THIRUVANANTHAPURAM:  Thousands of pensioners are feared to have left out of the government’s flagship health insurance scheme for state employees and pensioners. The enrolment for Medisep, Medical Insurance for State Employees and Pensioners, had ended in December last year. The Treasuries Department, the nodal agency for the enrolment, is accused to have failed in informing all pensioners about the scheme in time. 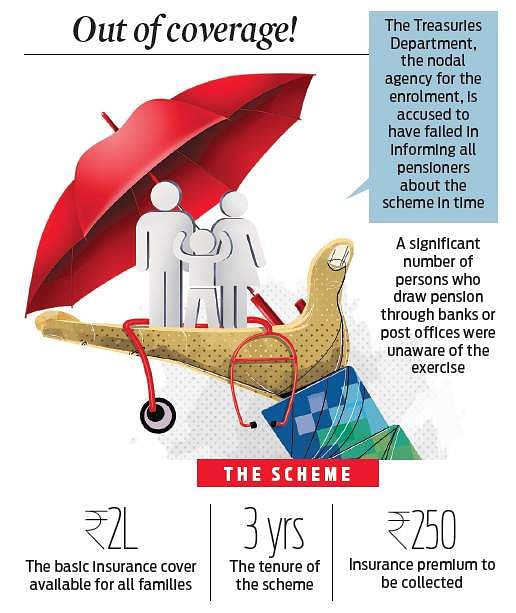 The department’s campaign modes were media releases and notices exhibited in treasuries. However, a significant number of persons who draw pension through banks or post offices were unaware of the exercise. ‘Express’ spoke to several pensioners who came to know about the scheme only after its formal announcement last week. Kunjamma Abraham, a family pensioner hailing from Kottayam, said neither she nor her friends were informed about the scheme.

“Most of the aged pensioners draw pension with the help of aides or through banks. They have missed the opportunity to join the scheme,” she said. Treasuries director Jafar A M said the department made all possible efforts to publicise the scheme. “The enrolment extended over a couple of months and there were media reports on it. All treasuries had exhibited notices,” he said.

Pensioners who submitted applications before the cut-off date will be considered in the current phase of enrolment. The Treasuries Department has already handed over the details of beneficiaries, i.e. those who have submitted applications within the cut-off date, to the Finance Department.“All treasuries continue to receive applications. Late filings will be considered in the next phase of enrolment,” Jafar said.

Now we are on Telegram too. Follow us for updates
TAGS
pensioners health insurance scheme