With no auditing for four years, ride not smooth for KSRTC

Another surprising reply was that the corporation has not done any analysis of the routes and schedules which are making profit or loss.

KOCHI:  The Kerala State Road Transport Corporation (KSRTC), which consumes Rs 3,620.81 crore for its day-to-day functioning, is running on a worst financial management. It has not done auditing of the corporation for the past four years and has no clue about how much loss it has made between 2015-16 and 2018- 19 fiscal. 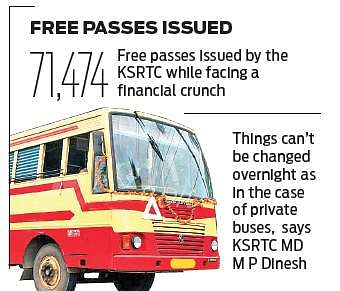 This shocking fact has come to light when the public is reposing much expectation on the services of KSRTC, following the attack on passengers by some of the employees of private bus operator Kallada Travels.

What’s more, in spite of all these operations in the state, the corporation has no idea about the routes and schedules which are making profit and the routes that need to be analysed to make them profitable.

We are bound by rules: KSRTC MD

Another surprising reply was that the corporation has not done any analysis of the routes and schedules which are making profit or loss. “How can a corporation function like this? They don’t have any idea about the loss it has been making in the past four years. The government or the top management of the corporation are not serious about reorganising the corporation to rescue it,” said RTI activist Binu. KSRTC managing director M P Dinesh, who assumed the post in January 2019, said the corporation is undergoing a crisis situation and they cannot turn things around overnight as in the case of private bus operators.

“We have to follow all rules and regulations while introducing routes and schedules. As a corporation, we are bound by rules, whereas private bus operators can manipulate things,” he said. Even as the KSRTC is facing financial crunch, the corporation has issued 71,474 free travel passes.

Now we are on Telegram too. Follow us for updates
TAGS
Kerala State Road Transport Corporation KSRTC Kallada Travels