Wayanad witnessed a dip of 55 per cent rainfall and Idukki 48 per cent. Kasaragod, Kannur, Kozhikode and Mahe have found a place in the normal category of rainfall received.

KOZHIKODE: The first phase of the Southwest monsoon (June-July) is over and the state registered 933.4 mm of rainfall, marking a dip of 32 per cent compared to the same period last year. According to the India Meteorological Department (IMD), Wayanad witnessed a dip of 55 per cent rainfall and Idukki 48 per cent. Kasaragod, Kannur, Kozhikode and Mahe have found a place in the normal category of rainfall received.

Normal rainfall is calculated taking the average of rainfall received from 1961 to 2010. District-wise, Kasaragod tops the chart with 1,728.3 mm rainfall, a dip of 15 per cent from the normal. Kozhikode received 1,593.2 mm, a shortage of 11 per cent.

In the corresponding period last year, the state received 1,609.3 mm of rain. Idukki got 2,102.4 mm during the same period and Wayanad received 1,903.4 mm. According to Dr V K Mini, director-in-charge of Meteorological Centre Thiruvananthapuram, three reasons were cited for scanty rainfall.

“Monsoon set in late. Second, cyclone Vayu came as a dampener and disturbed the monsoon winds. Another reason is the less number of monsoon depressions in the Bay of Bengal,” she told Express. For August, the all-India forecast is that 99 per cent of the normal rain is expected. But the normal rainfall of August is far less compared to June and July. According to Skymet Weather Services, the anticyclone disturbed southwestern winds which cost the monsoon dearly. Lakshadweep got 108.6 mm extra rainfall during these two months.

How the math is done

Kozhikode: Normal rainfall is calculated by  taking the average of monsoon rainfall received from 1961 to 2010. During the year ago period, Kerala received 1,609.3 mm of rain 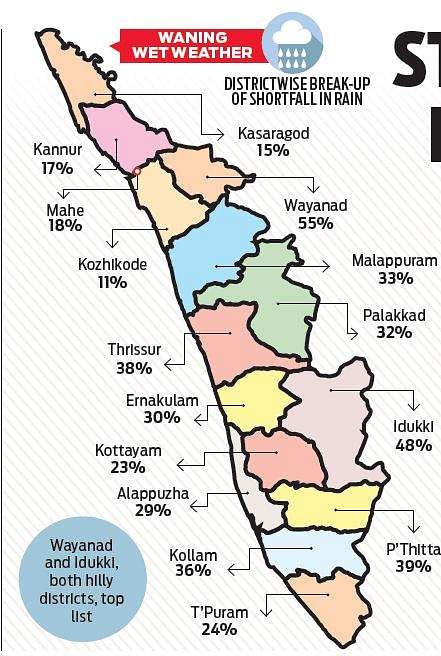 Now we are on Telegram too. Follow us for updates
TAGS
Kerala monsoon Kerala rain