As rain stays away, Kerala stares at load shedding

A review meeting of the KSEB has decided to go ahead with the plan to impose load shedding from August 16 if the state does not receive adequate rainfall during the next couple of weeks.

KOCHI: The state may soon feel the pinch of rain-deficient monsoon as the Kerala State Electricity Board (KSEB) is planning to impose power curbs. A review meeting of the KSEB has decided to go ahead with the plan to impose load shedding from August 16 if the state does not receive adequate rainfall during the next couple of weeks. The decision has been taken considering the water level in the dams, the predictions given by the India Meteorological Department (IMD) and the current inflow in various reservoirs. 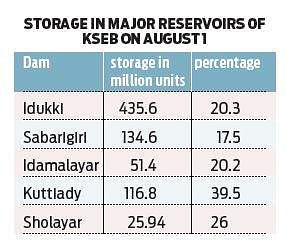 “The IMD has issued an orange alert for Idukki and the catchment areas of Sabarigiri project, which gives us hope. However, the situation is worrying as we have water to generate only 869.05 million units of power, compared to last year’s storage of 3,600 million units. The state is staring at a severe drought situation. If we don’t receive enough rainfall in our catchment areas during the next two months, it will lead to severe water shortage,” KSEB chairman N S Pillai told Express.

He said the next board meeting scheduled to be held on August 16 will take a call on imposing load shedding. “Unless we start conserving water now onwards, there will be acute shortage of potable water and power from February onwards. If the Northeast monsoon brings good rain, it will ease the situation,” said Pillai.

Meanwhile, the power consumption in the state has increased after the rain subsided. While the average consumption stood at 62 million units per day during the rainy days, it shot up to 71 million units on Saturday.

Though the recent rain has brought water to generate 362.3 million units of power after July 15, the total storage in dams stands at 21 per cent. Compared to the 10-year average storage of the KSEB reservoirs, there is 50 per cent decline in water storage.

More from Kerala.
Now we are on Telegram too. Follow us for updates
TAGS
load shedding Kerala rains Kerala monsoon Kerala State Electricity Board KSEB