Should Kerala fear another August 2018 like deluge? Experts and CM have this to say

Experts have warned the public to be alert as heavy to very heavy and at times, even extremely heavy rain, has been predicted in the next four days across the state.

THIRUVANTHAPURAM: Another August. And Kerala is in the grip of another flood scare.

According to official figures, rain-related calamities across the state have claimed 22 lives so far. Over 22000 people from 6000 families have had to be shifted to 315 relief camps. Red alerts have been issued in nine districts. More than 24 landslides have been  reported from different districts.

Rescue operations are on in full swing. The Cochin International Airport has been shut till Sunday 3 pm. Flights to Kochi are likely to be diverted to Thiruvananthapuram and the Naval Base airport in Kochi.

All this has meant that the ghosts of August 2018, the month that witnessed the worst deluge in Kerala's history, have been rekindled.

Worryingly, some climate and disaster management experts, whom Express spoke to, do not rule out the possibility of another massive flood.

They have warned the public to be alert as heavy to very heavy and at times, even extremely heavy rain, has been predicted in the next four days across the state.

The India Meteorological Department has predicted widespread rains - heavy to very heavy and extremely heavy till August 10 - across the state, especially in Idukki, Malappuram, Kozhikode and Wayanad.

"As per the district rainfall forecast, the rain spell will continue for four more days. Already there are floods at places. Hence we have issued alerts and asked the authorities to be fully prepared," said K Santhosh, director, IMD Kerala.

If the rains are going to be very heavy, it could lead to a more or less similar situation in the state as was seen last year.

Post the 2018 floods, the people's perception about what could happen has changed drastically.

But KG Thara, former head of State Disaster Management Centre, was not sure if the change in perception post the August 2018 floods will lead to better ground level preparedness.

Community-based disaster preparedness is very essential to deal with such situations. Ruing the lack of a long-term plan on the part of government, the disaster management expert stressed that letting the people know what needed to be done in such situations was essential.

"At the community level, people should know what should be the immediate course of action. Being a densely populated area, no department on its own will be able to handle the situation if it turns out to be a repeat of 2018. Unless the people themselves are told what are the risks and where to go for safety, it's going to be very difficult," she said. 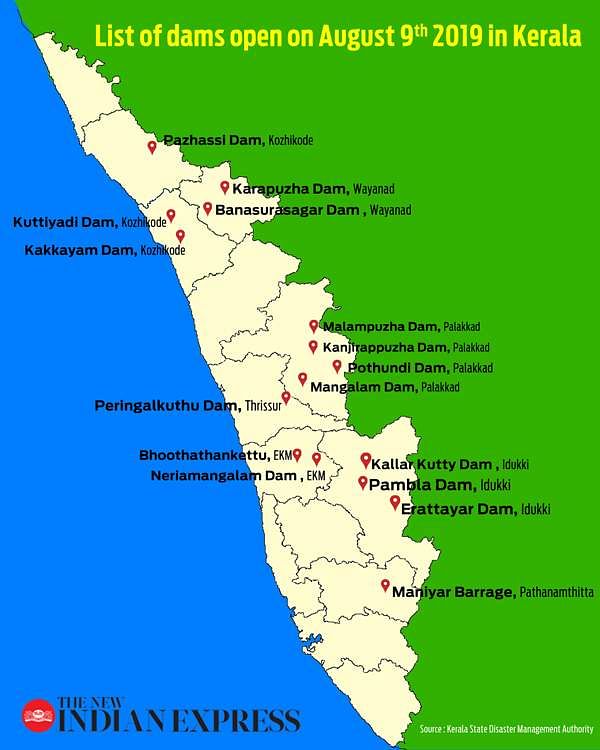 Clear-cut directives are necessary. Thara stressed. "Unless the community knows what to do, they will remain helpless victims and will be left stranded, waiting for some kind of information from the authorities."

In the case of an Yellow alert, people should know how much time they have and what action should be taken - like going to a safe shelter or assembling at a specific region. Instead of a vague directive to be 'extremely cautious', they should be told about the specific action that ought to be taken.

"The government could have done this in the past one year (but did not). Whether it is going to be a repeat of 2018 will become clear, once information regarding the reservoir level is made public," she added.

Thankfully, there was some relief on that count at least when it came to the water levels in the big dams, based on data released Thuesday:

Situation will not be as bad as last year, assures CM

Chief Minister Pinarayi Vijayan in a briefing on Friday said people living near the banks of the river must remain prepared.

Briefing the media after a flood review, he said rivers such as Periyar, Valapattanampuzha, Kuthirapuzha and Kurumanpuzha were flowing at dangerous levels.

"We have received warning regarding the river flow from the Central Water Commission. We are keeping a close watch on Chaliyar river as more water is likely to flow into it with the destruction of Contour canal in Tamil Nadu,” the Chief Minister said.

Low-lying areas in Aluva and Kalady were inundated after Periyar crossed the banks.

Vijayan said the shutters of Banasurasagar dam will be opened soon as the water level has reached 78 per cent of the reservoir capacity.

So far shutters of Kutiyadi and Peringalkuthu dams were opened after the rain intensified.

“There is a warning mechanism in place to inform people regarding the opening of dam shutters.” said the Chief Minister.

According to him rain was expected to weaken by Sunday, but high-intensity rain will resume by August 15.

“The situation will not be as bad as last year. We have taken precaution to meet the challenges,” he said.

Stay up to date on all the latest Kerala news with The New Indian Express App. Download now
(Get the news that matters from New Indian Express on WhatsApp. Click this link and hit 'Click to Subscribe'. Follow the instructions after that.)
TAGS
Kerala flood Kerala floods rain Kerala rains Pinarayi Vijayan Kerala dams Idukki Kozhikode Malappuram Wayanad