Kerala floods: Soldier who led rescue mission was not spared either in Kavalappara landslide

Vishnu Soothrathil, a young soldier who went missing in the landslide at Kavalappara on Friday, was a man of steel for local residents.

KAVALAPPARA: Vishnu Soothrathil, a young soldier who went missing in the landslide at Kavalappara on Friday, was a man of steel for local residents.

He was having food at his residence, after initiating a rescue operation in a flood-hit area nearby on Thursday night, when he and three other family members got caught under the debris.

His brother Jishnu, who was away at the time, was the only one to escape.

Adding to the misery, three more relatives who were there to visit Vishnu, also have gone missing. Search for all seven are still underway.

Jishnu, 21, is yet to recover from the trauma.

“Vishnu came to make arrangements for the marriage of our sister. He had planned to take a bank loan and buy ornaments for her. Besides, he wished to renovate the house,” said Jishnu.

According to him, the landslide occurred a few minutes after Vishnu reached home after initiating a rescue operation near Panamkayam, which was flooded following torrential rain on Thursday night.

Jishnu, an industrial worker, was on his way back after work, but the landslide-hit roads of Kavalappara prevented him from getting home. He never expected the disaster to hit his house and trap his dear ones.

Vishnu, 26, a Sepoy with Signal Regiments at Siliguri, West Bengal, reached his house on August 3 on a 20-day leave.

Vijayan, 62, his father, Visweswari, 55, his mother and sister Jishna, 20, are still missing. Narayanan, brother of Vijayan, his wife Kamala and daughter Bhavya are the three other relatives trapped under the debris. 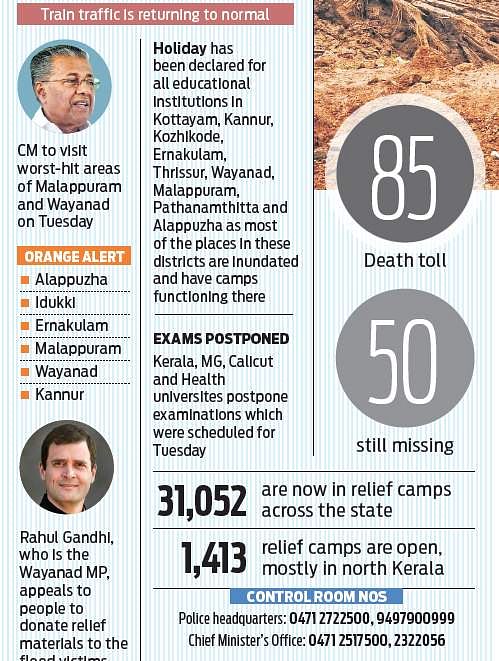 The remains of their house were recovered a few miles away from the valley of the hill where it was located.

“He was a brave fellow and willing to help anybody,” he added. Roopesh, a BSF jawan and local resident, said Indian Army officials have enquired about the ongoing search operations.

EFFORTS ON, BUT TOUGH & TIRING

After four days of intense rain, clouds stayed clear over most parts of Kerala on Monday

More from Kerala.
Now we are on Telegram too. Follow us for updates
TAGS
Kavalappara Kerala floods Heavy rainfall monsoon Flood Fury