Kerala plans to move away from traditional construction

Some feel the talk is made only to divert attention, experts believe it needs time

KOCHI: The massive landslides at Kavalappara and Puthumala that buried huge tracts, leaving a trail of destruction, has served Kerala a wake-up call. Chief Minister Pinarayi Vijayan, who briefed media on the Cabinet decisions on Wednesday, said the state is eager to stop encouraging concrete buildings, and promote use of steel and prefabricated structures for construction. 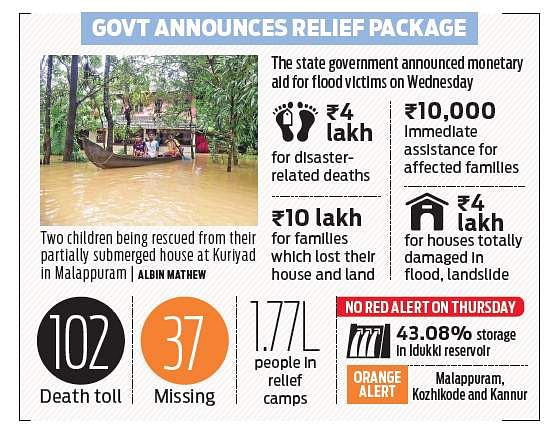 His statement has triggered a debate, with environmentalists welcoming the idea and builders questioning its practicality.The construction sector is the only booming industry Kerala and the ecologically-sensitive state has been extracting millions of tonnes of sand and granite every year to make concrete structures. Shifting to alternative technology and imposing restrictions on building sector can have far-reaching implications on the state’s economy, say experts.

“It’s possible to reduce the use of concrete, but it’ll lead to a steep increase in building cost. Another challenge is acceptability. If the client refuses to accept the technology, no builder can survive. The government should facilitate introduction of alternative technology, bring manufacturers and incentivise it. There should be sustained efforts to create awareness,” said Confederation of Real Estate Developers Association of India (CREDAI) secretary Antony Kunnel.

Welcoming the decision, environmentalist C R Neelakantan called for restrictions. “The government should intervene to bring a sea change in the methodology and size of houses. Many people are building palatial mansions for pomp and show. Wetlands are filled and hills razed down to satisfy the extravagance of the affluent. The government should restrict land use and ration resources to conserve nature,” he said.

‘Curbs are an eyewash’

The Western Ghats Ecology Expert Panel (WGEEP) headed by Madhav Gadgil had recommended classification of the Western Ghats area into three Ecologically Sensitive Zones based on the fragility of the ecosystem and recommended restrictions on human activities in these areas. The Kasturirangan Committee report recommended some relaxations and brought down the ESZ area to 13,000 sq km in Kerala. As a section of the community, including the Church, launched an agitation, the state government appointed Oommen V Oommen Committee which brought down the ESZ area to 9,993.7 sq km. Even after watering down the Gadgil Committee recommendations, the restrictions are yet to be implemented.

The state government has imposed a temporary ban on quarrying in the state after there were landslides across the state following the torrential rains. According to geologists there are 5,924 granite quarries in the state of which around 1,000 are said to be illegal.

“The restrictions are an eyewash. It’s not possible to move away from concrete structures all of a sudden. Ban on quarrying will affect development projects and there’ll be pressure from the industry to lift it. The only way is to stop quarrying in ESZ areas and allow quarrying in safer zones. The government should take over the granite quarries to avoid indiscriminate exploitation of natural resources,” said earth scientist Subhash Chandra Bose.

5,924granite quarries are in operation in the state
30quarries in Idukki district alone