Biyyathhil Mohiuddin Kutty, popularly known as B M Kutty and BKM, a Pakistani politician from Tirur, Kerala, passed away in Karachi in the early hours of Sunday. He was 90.

MALAPPURAM: Biyyathhil Mohiuddin Kutty, popularly known as B M Kutty and BKM, a Pakistani politician from Tirur, Kerala, passed away in Karachi in the early hours of Sunday. He was 90.

He had migrated from Kerala to Pakistan in 1947 when he was 19. He was influenced by the Left movement in Kerala. He began his political life as a member of the Kerala Students Federation in the 1940s. After finishing his college education, he travelled to Khokhrapar -- a border town situated in Tharparkar district of Sindh province in Pakistan. Later, he started his life in Pakistan as a muhajir (a Muslim immigrant). 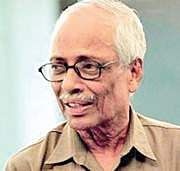 He associated himself with Azad Pakistan Party in Lahore between 1950 and 1957 and later with Pakistan Awami League in Karachi.

Kutty actively involved in the politics of National Awami Party (NAP) from 1957 to 1975. As NAP was banned in 1975, he  worked with the National Democratic Party till 1979. Later, he worked with Pakistan National Party from 1979 to 1997. He also worked with National Workers Party as its central information secretary.

He released his autobiography ‘Sixty Years in Self-Exile: No Regrets’ in 2011. After the book launch, BMK said that no one had pushed him out of Kerala and he went to Pakistan and voluntarily became a part of the nation’s political system. His voluntary action is explained by the term ‘self-exile’ in the title of the autobiography. Right after the term, there is the phrase ‘no regrets’.

“It is the truth of my life. I have no regrets for the choices I made,” he was quoted as saying after the book launch ceremony in New Delhi.

More from Kerala.
Now we are on Telegram too. Follow us for updates
TAGS
Biyyathhil Mohiuddin Kutty B M Kutty