He was speaking after inaugurating the new office building of Norka, which was set up on the sixth floor of MG Road Metro station.

KOCHI: The government has always taken a positive stance when it comes to the welfare of Non-Resident Keralites (NRKs) and it is planning an array of new projects in this regard, Chief Minister Pinarayi Vijayan said here on Sunday. He was speaking after inaugurating the new office building of Norka, which was set up on the sixth floor of MG Road Metro station. 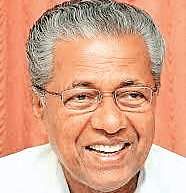 “NRKs are the real strength of Kerala. The government is always committed to work for their welfare. Along with implementing various projects for their welfare, the government is planning some new programmes for them. Those projects should reach them. That is where Norka steps in,” said Pinarayi.
He said the Norka missed call project helps Malayalees abroad to stay connected with the agency. “There are various NRKs who are interested to invest in Kerala. The Norka facility centre is set up to help such potential investors to identify potential investment opportunities,” said the Chief Minister.

According to him, Norka-Roots has already spent around `25 crore last year, under the Santhwana scheme, to provide financial support to NRKs returning to their native place. “Loka Kerala centre will be formed at Mavelikkara and scholarships are to be made available for children of NRKs. The second session of Loka Kerala Sabha is to be held on January 2020,” he said.

Pinarayi also presented the Letter of Award to Thayyil Habeeb for the first commercial venture to be launched under the newly opened Business Facilitation Centre. As per the agreement, Habeeb will open his commercial unit at Edappally station.

More from Kerala.
Now we are on Telegram too. Follow us for updates
TAGS
Norka Pinarayi Vijayan Kerala