The interim budget did not offer any sops or concessions for the flood-ravaged state.

THIRUVANANTHAPURAM:  The interim budget did not offer any sops or concessions for the flood-ravaged state.

“Apart from neglecting the long-pending demands of Kerala including railways, the Centre continued its neglect to post-flood rehabilitation and rebuilding effort of the state and the NRI welfare programmes. The Centre is trying to reap a harvest by pointing to the rain-laden clouds in the desert,” said A Sampath MP.

Terming the budget disappointing, KPCC president Mullappally Ramachandran said various populist schemes announced by the Centre targeting farmers and labourers in the unorganised sectors were not realistic and the Centre was trying to use the budget as a political weapon.

The Union Government’s decision to transfer Rs 6,000 per year to the accounts of farmers owning up to two hectares is akin to the Rs 15 lakh promised by Narendra Modi, said AICC general secretary Oommen Chandy.​

BJP state president P S Sreedharan Pillai said the budget was the reflection of the development and progress achieved by the Centre during the past four-and-a-half years. The decision to create a separate ministry for fisheries was based on the demand by the state BJP unit and it would be beneficial for a state like Kerala which has a long coastline, he said.

* Internal and extra-budgetary resource
* There is no mention of allocation to FACT in the budget fine print, though a meagre I1 crore is set apart towards write off of loans for the entire fertiliser PSUs

In the current scenario I must say a very balanced and people-friendly budget. The various reforms in tax regime and the banking sector are sure to make Indian economy very transparent. The move towards making India a trillion-dollar economy is going to be a game changer as far as foreign direct investment is concerned.

Increase of IT ceiling is sure to boost consumer spendings which is a very welcome move as far as retail and shopping sector is concerned. Needless to say the emphasis given on agriculture, farmers’ welfare, infrastructure development and banking sector is going to have a very long term positive impact.

Dr Azad Moopen, CMD, Aster DM Healthcare
One interesting highlight in the Interim Budget is the vision for ‘Healthy India’ by building a distress free, functional and comprehensive healthcare and wellness system by 2030. With the launch of Ayushman Bharat, wherein  `3000 crore has been allocated, I believe we are moving in the right direction. With the proposal for Digital India, the government is keen on converting 1 lakh villages of India into digital villages. 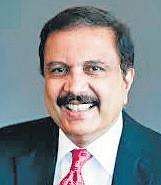 The focus is on reducing the urban-rural gap through best in class infrastructure. We are hopeful that this will eventually result in reducing the urban-rural gap in healthcare delivery. Another remarkable announcement by the Finance Minister was emphasis on technology-driven growth and the National Artificial Intelligence (AI) portal to be set up soon. We are hopeful that this would further benefit the healthcare sector with the introduction of AI for better detection and treatment areas. What we missed in this budget is the increase in budget pie for healthcare. We are hopeful that the government in the long run will certainly take a step further on this.

T S Kalyanaraman, CMD, Kalyan Jewellers
With the increase in the tax exemption slab to C5 lakh, the interim budget has given substantial relief to the middle class. With a resultant increase in the disposable income in the hands of the consumer, we should see an increased demand for gold and jewellery. With other positive announcements easing the tax processes for the self-employed and GST reforms, this budget has brought good cheer to consumer facing businesses.

Thomas John Muthoot, CMD, Muthoot Pappachan Group
The Kisan Samman Nidhi, the direct transfer plan for all farmers owning upto 2 hectares of land potentially reaches out to - given the average size of a family as 4, if not more – to about 48 crore people. That’s a whopping 40 per cent  people in India. Though the amount is small, at about 5 per cent  of per capita income and implementation is key, it could work meaningfully as a minimum guaranteed social security cover. The identification of the workers in the unorganised sector, which is 85-90 per cent of the workforce overall, is indeed really insightful and is like unearthing a hidden gem.

It’s trial one, original is yet to come: Kannanthanam

“The interim budget presented by the NDA Government is a great one. Around 95 per cent of people in the country are outside the I-T net, with the government announcing no tax for those whose taxable income is less than C5 lakh and  people with gross income of upto C6.5 lakh will not have to pay tax if they make investments in provident funds(PF) and prescribed equities. So is the case with the government decision to transfer C6,000 per year to the accounts of farmers having land holdings of upto two ha. More than 95 per cent of the farmers from Kerala will benefit from this scheme as well. In the case of tourist allocations, the state will get its due from the  C 1,106 crore allotted for Integrated Development of Tourist Circuits around specific themes(Swadesh Darshan). Further, this is trial one and the original is yet to announce.