For instance, a kilo litre(kl) of ATF costs an airline around `75,000 and an aircraft takes in around 14-16 kl in one filling under normal circumstances.

THIRUVANANTHAPURAM: The state government decision to woo more airlines to commence operations from the newly-opened Kannur International Airport (KIAL) by giving tax rebate on Aviation Turbine Fuel (ATF) is arbitrary and against the interests of other government-owned neighbouring airports especially the Calicut Airport in Karipur.

Already, Karipur lost no fewer than three domestic flight schedules after the government fixed the VAT being levied on ATF at 1 per cent in KIAL for the next 10 years, against the 28 per cent charged at the other three airports  in the state - Thiruvananthapuram International Airport and Nedumbassery Cochin International Airport (CIAL), besides Karipur.  Not only this,  the government’s claim the sales tax reduction was given considering the fact  the airport is included under the Centre’s UDAN Scheme is somewhat misleading. 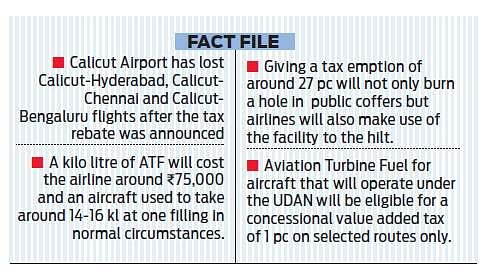 “It is true  ATF for aircraft operating under the proposed  Regional Connectivity Scheme(RCS) UDAN will be eligible for a concessional value-added tax of 1 per cent. But this concession will be available only for UDAN flights operating on selected routes. But in the case of KIAL, the tax exemption has been given to all flights which will operate from there in the next 10 years. So naturally, the airline companies operating from airports nearby will be attracted to KIAL as they will benefit from this move,” said Jacob K Philip, aviation expert.

For instance, a kilolitre(kl) of ATF costs an airline around `75,000 and an aircraft takes in around 14-16 kl in one filling under normal circumstances. Giving a tax emption of around 27 per cent will not only burn a hole in the public coffers, but the airlines will also make use of this facility to the maximum, he said.

This will mean an airline which intends to operate a scheduled flight from Thiruvananthapuram to New Delhi can operate on the Kannur-Thiruvananthapuram- New Delhi route to get the benefit instead of choosing Kozhikode or Kochi. So this move naturally raises a question whether this model of business development is feasible for a state ruled by the CPM-led Left bloc which has always opposed privatisation and staunch supporter of the strengthening of the public sector.

While the Calicut Airport and Mangaluru Airports are one hundred per cent government-owned airports in the public sector, the state government has only 26 per cent stake in KIAL, with private players holding the remaining stake. So the move raises ethical questions as well. The CM’s claim on KIAL entailing greater expenses for running its operations has also no logic considering the fact the Cochin International Airport built on private-public partnership was not given any such exemption at any point of time.

“So this model of business development is not a viable one and government should explore other avenues to make it profitable. If the state is determined to provide tax exemption, then it should extend the same to other airports in the state. Many states like AP experimented with this. Providing uniform exemption to all airports in the state will benefit the state, the economy of which is heavily dependent on tourism,” said Biji Eapen,  IATA Agents’ Association of India national president.

Stay up to date on all the latest Kerala news with The New Indian Express App. Download now
(Get the news that matters from New Indian Express on WhatsApp. Click this link and hit 'Click to Subscribe'. Follow the instructions after that.)
TAGS
KIAL UDAN Scheme