The main Opposition UDF on Monday accused the state government of adopting a step-motherly attitude towards Karipur International Airport in Kozhikode.

THIRUVANANTHAPURAM: The main Opposition UDF on Monday accused the state government of adopting a step-motherly attitude towards Karipur International Airport in Kozhikode. Raising the issue in the Assembly, the Congress-led alliance demanded that in line with the decision for the newly-opened Kannur International Airport (KIAL),  Aviation Turbine Fuel(ATF) tax at Karipur should be slashed to one per cent.

The state government, while supporting KIAL, has been neglecting other airports in the public sector, the UDF alleged. Accusing Pinarayi of acting like the Chief Minister of Kannur, the UDF urged him to act like the CM of the state.Chief Minister Pinarayi Vijayan, however, maintained that high priority is being accorded to Karipur and put the blame on the Centre for lack of support. Alleging the government is giving increased focus to the newly-opened KIAL at the cost of Karipur, the UDF members stormed out from the House. 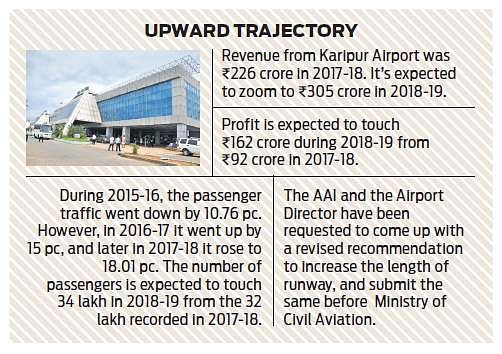 Responding to the notice for adjournment motion, Pinarayi said being a major transit point for Hajj pilgrims, Kozhikode has been given special priority. Rejecting the UDF charge, Pinarayi said since Kannur is a new airport and is to be included in Centre’s UDAN Scheme,  fuel tax has been reduced to 1 pc for 10 years.

Referring to land acquisition related issues, he said additional acquisition of 137 acre is needed for the airport’s development. The process of acquiring land and handing over to the Airport Authority of India(AAI) is in the final stages. In a veiled attack on the UDF, Pinarayi criticised the UDF for protests against land acquisition. Only after the LDF came to power, steps for land acquisition started, he said.

“Thiruvananthapuram, Kochi and Kozhikdoe have not been included in the UDAN Scheme as these are not unserved/under served airports. Also, AAI has not granted any concessions in landing fee, parking fee and handling charge. Since Kannur is a greenfield airport, there will be major cost for daily operations.  Rubbishing the Opposition charges, Pinarayi said special focus has been given to Kannur since it’s a new airport. Steps have been initiated to protect Thiruvananthapuram Airport. Also, steps for Sabarimala airport are currently on.

Earlier seeking leave for the motion, Deputy Opposition leader M K Muneer said KIAL has been given additional prominence at the cost of Karipur Airport. Referring to a 2017 Cabinet decision to slash fuel tax to 5 per cent from 29 per cent, he said the decision has not been implemented so far. He urged the government to reduce fuel tax to 1 pc in other airports also.

“You should not act like the CM of Kannur; Instead you should behave like the Chief Minister of the state,” Muneer said. Opposition leader Ramesh Chennithala said if fuel tax is reduced to one per cent, flight fares will come down. That’s ll lead to more people opting for air travel. The government should take urgent steps to reduce the fuel tax for all four airports.