The loan was allotted to the families which lost its livelihood and home equipment in the worst deluge that affected the state in mid-August 2018.

ALAPPUZHA:  The Resurgent Kerala Loan Scheme (RKLS) introduced by the state government to lend a helping hand to the flood-affected people of the state is a big success with the allotment of Rs 1,016.09 crore in five months. The interest-free loan is allotted to around 1,24,663 beneficiaries through the ‘ayalkoottam’ under Community Development Societies (CDS) of the Kudumbasree Mission.

The loan was allotted to the families which lost its livelihood and home equipment in the worst deluge that affected the state in mid-August 2018. The beneficiaries, who had received `10,000 as immediate relief after the flood, are entitled to avail the loan. 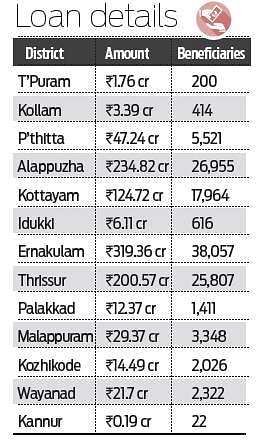 Kudumbashree Mission executive director S Harikishore said, “The state government has extended the deadline of the loan to March 31 as per the request of the beneficiaries. The government declared nine months moratorium to the loan.

The CDS will collect the installment with interest. The Mission will repay the interest to CDS after it is received from the Chief Minister’s Distress Relief Fund.” The repayment period is three to four years. The loan defaulters will be exempted from all benefits of government schemes and loans under the Kudumbasree Mission, officials said.

Mission district programme manager P Sunil said, as per the rule, the maximum number of  ‘ayalkoottam’ members is 20. So the government directed to form new ‘ayalkoottams’ if any area has more than 20 applicants for the loan. “As per the guidelines of the State Level Banking Committee, only after six months of the registration of an ‘ayalkoottam’, the banks will allot loan. The government gave permission to register new ayalkoottams after the flood and many were formed. So, to cover the six-month period, the last date of submission of loan application has been extended to March 31,” Sunil said.

Stay up to date on all the latest Kerala news with The New Indian Express App. Download now
(Get the news that matters from New Indian Express on WhatsApp. Click this link and hit 'Click to Subscribe'. Follow the instructions after that.)
TAGS
Resurgent Kerala Kerala Loan Scheme Flood-hit Families Kudumbashree Mission