The use of artificial intelligence in cancer detection and treatment and disaster management solutions are other thrust areas.

“The figure for the year excludes undisclosed larger investments, which accounts to more than 10. At the same time, more than five Kerala-born startups were acquired by global firms, the acquisition figures of which are unknown,” Saji said, adding the state has incubated more than 1,509 startups already and has entered the list of thriving startup ecosystems in the country.

The state recently announced inking deals with four investment funds to raise a Rs 1,000 crore in corpus funds for budding entrepreneurs, to be available over the next four years. “The deal enables us to meet the ‘Seed’,  ‘Angel’ funding requirement for aspiring entrepreneurs in the coming years,” Saji said.

He said the USP of the Kerala startup ecosystem was its vision of promoting technology-based product companies and its focus on niche areas where it can offer advanced expertise, like space research. “With almost 300 engineers from Indian Space Research Organisation (ISRO) retiring every year, the presence of Indian Institute of Space Research and ISRO’s plan of setting up a centre for startups, the capital is slowly transforming into a hub for entrepreneurs interested in space research,” Saji said.

Kerala IT Secretary M Sivashankar said companies from outside the state and the country had expressed interest to associate for the proposal to set up a space research startup ecosystem in Thiruvananthapuram.
“We can offer a level of quality when it comes to such advanced fields. The perception of the ecosystem growing is helping us attract more investments,” said Sivashankar.

The use of artificial intelligence in cancer detection and treatment and disaster management solutions are other thrust areas. He said ‘Maker Village’ has become the largest hardware incubator in the country with 67 companies holding upto 25 patents.

Sivashankar said with institutional funding becoming robust in the state, the government will focus more on providing the required talent pool by promoting skill development and by providing an early marketplace by developing the country’s best public procurement policy for startups. 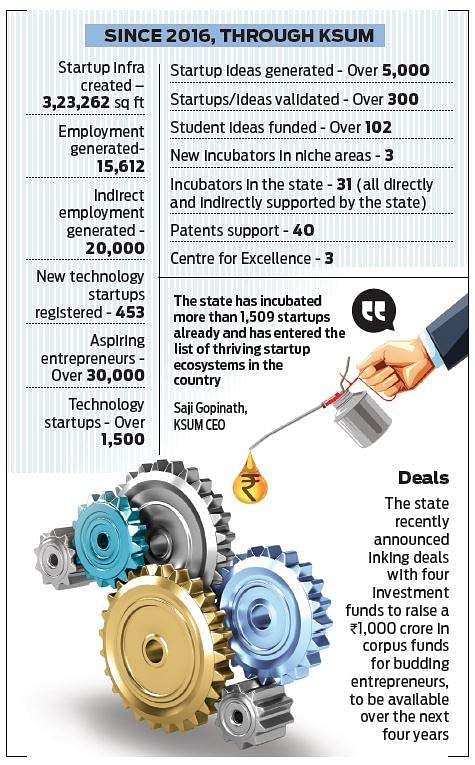 Stay up to date on all the latest Kerala news with The New Indian Express App. Download now
(Get the news that matters from New Indian Express on WhatsApp. Click this link and hit 'Click to Subscribe'. Follow the instructions after that.)
TAGS
Start up Kerala Startup Mission Saji Gopinath