The High Court has made it clear that the plywood companies that have valid consents of the Kerala Pollution Control Board can continue to function in Vengola panchayat.

The PIL alleged that from 2002-03 onwards, paddy lands situated within the limits of the panchayat were filled up and used for a purpose other than paddy cultivation. It further added that plywood manufacturing units that sprang up in the locality were using chemicals that were inherently harmful to human life and that the effluent from the units affected the water sources in the area. 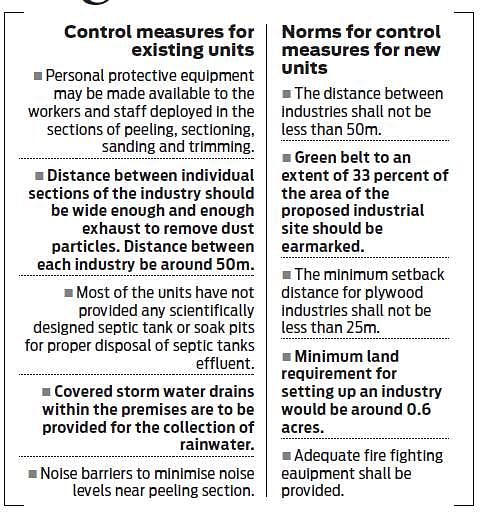 The petitioner sought a directive not to issue licences to plywood manufacturing units within the territorial limits of the panchayat. The HC said setting of new industries may be considered if infrastructure facilities like roads to meet traffic requirements, protected water supply and sewerage facilities are made. The HC asked Pollution Control Board (PCB) to ensure that the norms and control measures suggested in the environmental plan for existing units were followed by the companies.

If the additional requirements of infrastructure/machinery/measures, as envisaged by the environmental management plan, are not put in place within six months, the consent granted to the unit will be cancelled after due notice to them, the court said.

It said as regards issuance of fresh contents to units that are being set up in future, the state PCB should ensure additional norms and control measures specified in the environmental management plan are available in the unit, before granting consent in accordance with the applicable statutory provisions.

Stay up to date on all the latest Kerala news with The New Indian Express App. Download now
(Get the news that matters from New Indian Express on WhatsApp. Click this link and hit 'Click to Subscribe'. Follow the instructions after that.)
TAGS
Kerala Pollution Control Board Kerala HC