Pinarayi said youth in the country seem to be less concerned about the underprivileged.

KOCHI: The government will tweak the engineering college syllabus periodically to incorporate the latest developments in the field of technology so that students are ‘ready to work’ and ‘ready for tomorrow’, Chief Minister Pinarayi Vijayan said here on Sunday.

Inaugurating the Professional Students’ Summit, a first-of-its-kind initiative by the government at the Cochin University grounds here, the CM assured all red tapes would be removed in this regard so that the professional education in Kerala get the required fillip to meet the corporate sector’s demands.

As part of this, the government also launched an internship programme for engineering graduates under its Additional Skill Acquisition Programme (ASAP), where students can register and companies can give them chance based on their requirements.

Pinarayi said it would boost the employability of the students coming out of the state’s engineering colleges. “If need be, there’ll also be an update in the syllabus every year,” he said.

Rather than becoming tech colonies, Kerala society should strive to be the inventors and developers of technology, said Pinarayi. The summit, which saw the participation of over 2,000 students from Kerala’s various universities, and eminent personalities, industrialists and academicians from different streams of professional expertise.

Pinarayi said youth in the country seem to be less concerned about the underprivileged. The technological development should be used to address the issues faced by the farmers, fishermen and weavers.

“Technology should ultimately result in improving the lives of the people living in the lowest social class. Right now, technology is not reaching the common man. Only multinational corporations and monopoly firms do. The youth should take inspiration from the Silicon Valley in America, which is the product of entrepreneurial endeavours of some youngsters, who built highly successful startups from there,” Pinarayi said.

The Chief Minister said the state was focusing on the developments of all segments and stress is given to the startup sector.“The internet has brought about new possibilities in research. The youth can bring revolutionary changes through three stages viz., update, enhance and benchmark,” Pinarayi said, adding that the state government is bringing KFon, which connects educational institutions through the internet and free Wi-FI in villages.

“The state can only reduce the digital divide, but ultimately it’s up to the youth to take advantage and bring about revolutionary changes in the society,” Chief Minister added.Minister for Higher Education K T Jaleel made the presidential address.The day-long programme also saw experts from various fields mentoring select students from various professional colleges in the state. 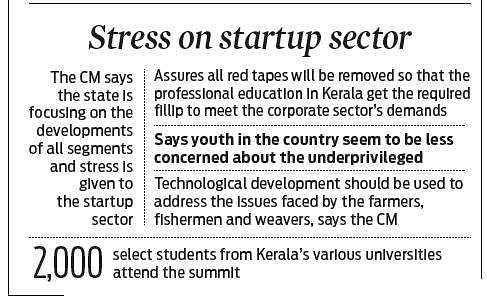