Three from Kochi among 17 killed in Delhi hotel blaze

The fire started around 3.30 am in the first floor of Arpit Palace Hotel in Karol Bagh, a popular hangout spot in Delhi known for its budget hotels and shops, specially for guests from the South.

KOCHI: at least seven persons from South India died in a massive fire that engulfed a central Delhi hotel in the wee hours of Tuesday, killing at least 17 and injuring 35.

There were 53 guests in the 45-room hotel at the time of fire. One person is missing. Among the dead were three from Kerala, two from Tamil Nadu, and one each from Andhra Pradesh and Telangana.

The fire started around 3.30 am in the first floor of Arpit Palace Hotel in Karol Bagh, a popular hangout spot in Delhi known for its budget hotels and shops, specially for guests from the South.

The Delhi Fire Service, which has a unit stationed not very far from the hotel, said it got the call by 4.35 am and 24 fire tenders were rushed to the spot. Officials said the deaths were due to smoke and not fire. The fire might have been caused by a short circuit, sources said.

The three Keralites who died in the accident — Nalini Amma, 85, of Panelil, Cherannelloor; her son Vidyasagar, 60; and daughter Jayasree, 53, of Pazhanganattu, Chottanikkara — were part of a 13-member group that travelled to Delhi to attend a wedding.

“As all of them were sleeping, they got little time to escape. All the 10 others in the group are safe,” said Anu Das, a family friend.Two textile workers from Tamil Nadu perished in the fire. Aravind Sukumaran (40) and Nandakumar (33), were working as merchandisers with a knitwear manufacturing unit in Tirupur. 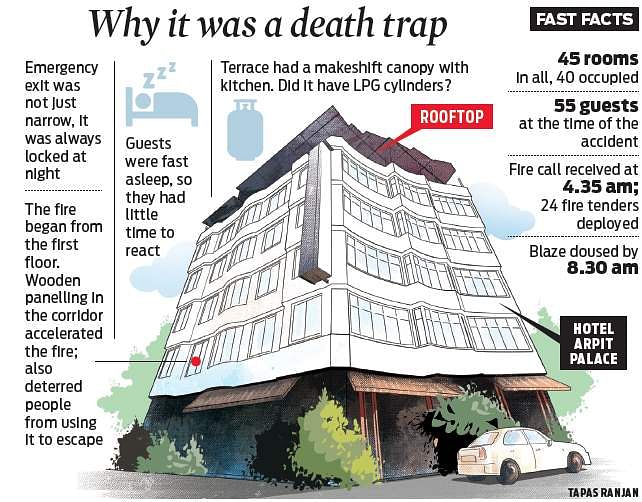 Stay up to date on all the latest Kerala news with The New Indian Express App. Download now
(Get the news that matters from New Indian Express on WhatsApp. Click this link and hit 'Click to Subscribe'. Follow the instructions after that.)
TAGS
Karol Bagh fire Delhi hotel fire Pinarayi Vijayan