Motorists failing to respond to MVD notice will face music

The first surveillance camera was installed on the Aroor-Cherthala-Mannuthy NH stretch under the Safe corridor project in 2011-12.

THIRUVANANTHAPURAM: Hitherto, motorists hauled up for flouting speed restrictions will no longer be able to get away by merely paying fines as the Motor Vehicles Department (MVD) will actively pursue the cases which can result in suspension of the driver’s licence.

To  strengthen the procedure,  the Transport Department had introduced a system two months ago under which reminders will be sent to the offenders if they don’t respond to the first charge memo and even after that if there is no response their licence will be suspended.

“Around 50 per cent of the offenders respond to the first notice. Another 20 percentage respond to the reminders sent by authorities. The rest of them, who do not respond to the warnings, will have their licence suspended,” said Rajeev Puthalath, Joint Transport Commissioner. Earlier the fine payment process was linked through e-treasury which has about 14-15 banks registered under it. There were no wide payment options like card or net banking. Rajeev said after the introduction of the reminder system and e-payment methods, the response has picked up and the number of violations has come down.

The first surveillance camera was installed on the Aroor-Cherthala-Mannuthy NH stretch under the Safe corridor project in 2011-12. “Since the installation of these cameras, the accident rate has come down by around 50 per cent, which has encouraged us to expand the project to the other locations. The department has installed 202 cameras along the Cherthala-Manjeswaram stretch,” said said Najeeb K M, assistant MV inspector, Ernakulam.

To nab the offenders the authorities have strengthened  enforcement, with 51 squads being set up and 11 interceptor vehicles patrolling the highways  under the Safe Kerala project.

Earlier, the cameras installed in the NH were spot speed cameras which could identify the speed only at the particular point. With the introduction of Automatic Number Plate Recognition (ANPR) camera, the camera can read the number of the vehicle irrespective of the speed. It is a ‘camera to camera speed detection system’, which is first being introduced on the Walayar-Vadakkanchery stretch. The advanced system will provide data with the average speed /km, travelled method. The department had completed the installation of 37 cameras along the stretch and the control room for these cameras will be set up at Kozhikode. The ANPR cameras’ inauguration will be held on February 20. 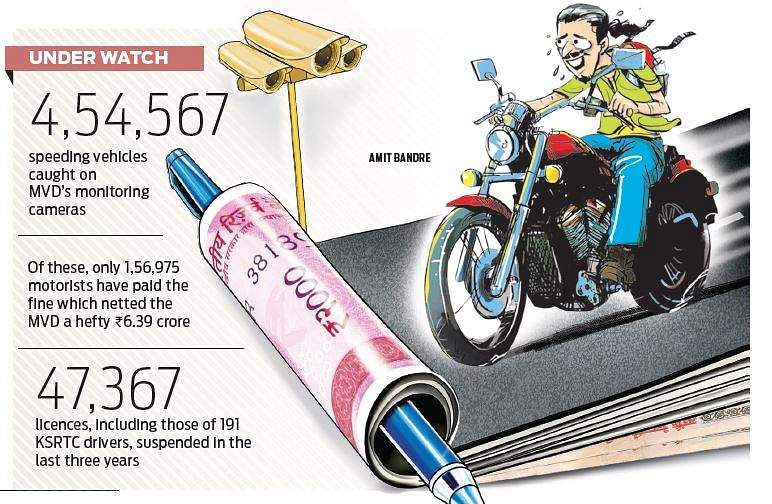