As a result, the victim became pregnant and gave birth to a baby boy on February 2, 2017.

As a result, the victim became pregnant and gave birth to a baby boy on February 2, 2017. Fr Robin told the family of the victim that his name was not to be disclosed and the name of somebody else was to be stated as the father of the child and threatened that otherwise, the victim and her family would be left out from the mainstream of the church. Thereupon, the victim gave a false statement before the police that she was impregnated due to rape committed by her own father. During the investigation, the episode took a dramatic turn and found that Fr Robin had committed rape.

While acquitting the second, sixth and seventh accused, the court observed the prosecution failed to prove they did not provide information to the police with regard to the offence. The court also held the prosecution failed to prove there was a criminal conspiracy among the accused. The call details create some suspicion against the accused. But in the facts and circumstances, the call details cannot lead to a conclusion of existence of a criminal conspiracy.

The trial began on August 1, 2018. There were many twists and turns which made the case all the more intricate as the father of the rape victim had claimed it was he who impregnated his daughter. But the DNA test of the baby proved beyond doubt that Fr Robin is the real father of the child. Both the victim and her mother had turned hostile during the trial, saying the survivor was not a minor when the rape had taken place.But, this too proved wrong as the birth certificate of the victim clearly showed she was a minor when the crime took place.The police team had to face many difficulties during their investigation as the church and other affiliated institutions had tried to protect the accused and cover up the case. 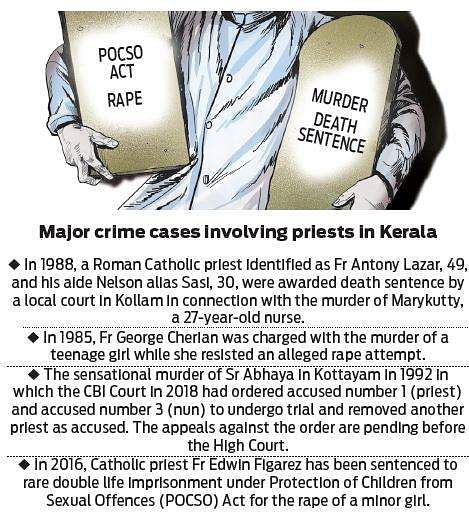