Palakkad and Idukki districts lead the table with 16 and 10 cases pending trial respectively.

Palakkad and Idukki districts lead the table with 16 and 10 cases pending trial respectively.Malappuram, which had recorded many such cases in the past, has only five child marriage cases pending trial as per the report. However, officers working in the field testify the number of child marriages held in various districts is still high, albeit there being a drop in the  number of cases reported to law enforcement agencies. According to the officers, the families involved in the practice devise multiple ways to ensure news about such marriages does not come out.

“Many families conduct unofficial engagement ceremonies while the girl is a minor and carry out formal wedding ceremony at a later point. In many cases, families may conduct an engagement without official documents until the girl becomes a major,” said a police officer on condition of anonymity.

“After the engagement, the girl and the groom continue to live in their own respective houses until the official ceremony which is conducted after they attain marriageable age. This is a tricky arrangement since there is no evidence to prove it,” he says.

“Despite the promulgation of the Prohibition of Child Marriage Act -2006, there is not much change in the people’s attitude. A special Child Protection Officer has been appointed  in each districts under the Social Justice Department to monitor and inform the number of child marriage cases in each district,” said a Social Justice Department officer.

According to the data tabled in the Assembly, there are 56 cases pending trial in the courts in the state. There are 10 cases pending trial in Thrissur district, seven in Thiruvananthapuram, four in Ernakulam  and one case each in Alappuzha and Pathanamthitta districts. Kannur, Kasaragod, Kottayam and Wayanad districts have no child marriage cases registered within their geographical limits. 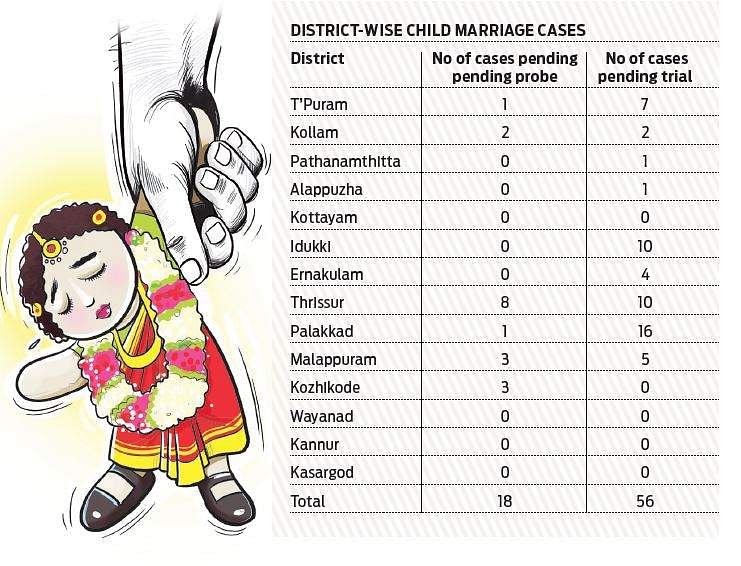