Blue Revolution: Kerala gets the blues as state’s fishermen miss the Kochi boat

Twenty seven shipyards in the country will build around 800 boats in the coming years to encourage fishermen take up deep-sea fishing in a big way.

KOCHI: Kerala’s loss is Tamil Nadu’s gain. A scheme initially proposed by Kerala to equip fishermen to take up deep-sea fishing is being implemented in Tamil Nadu by the Centre under its Blue Revolution Scheme.

The Rs 200-crore sop has left Kerala’s Fisheries Department sulking. It was the state which first submitted the proposal in 2016 for a Rs 74-crore subsidised scheme to provide 47 deep-sea fishing boats to fishermen cooperative societies.

The Centre rejected the proposal citing the high cost involved as the cost of each boat touched Rs 1.5 crore. Though Kerala submitted a revised proposal, the Centre is yet to respond. According to Fisheries Minister J Mercykutty Amma, Union secretary in charge of the Fisheries Department has assured to sanction Rs 16 crore under the scheme.

“The Centre has allotted Rs 200 crore of the Rs 400 crore earmarked for the scheme to Tamil Nadu. Though they assured to give 16 crore to Kerala, no fund has been allotted till date. This is a biased approach. It’s a politically motivated decision in view of the Lok Sabha elections,” she said. 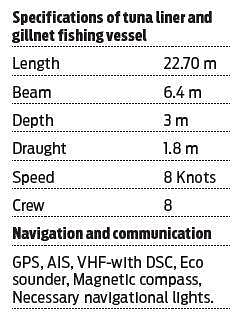 The boats built as per the design created by the Central Institute of Fisheries Technology (CIFT) and fine-tuned by experts at IIT Kharagpur, cost around Rs 1.5 crore. As the Centre has directed to cap the price at Rs 86 lakh, the Cochin Shipyard is digging into its own Corporate Social Responsibility fund to meet the expense for the first batch of 16 boats. CIFT scientists said the Centre has accepted the design developed by it to standardise the fishing boats’ specifications. Twenty seven shipyards in the country will build around 800 boats in the coming years to encourage fishermen take up deep-sea fishing in a big way.

Tamil Nadu is providing a subsidy of Rs 16 lakh for each boat and has arranged soft loans to the tune of Rs 30 lakh per boat to empower the fishermen. Around 350 fishermen in four coastal districts of Tamil Nadu have registered under the scheme expressing willingness to replace their trawler boats with the new deep-sea boats.

“The Centre has given preference to Tamil Nadu in view of the stand off between the fishermen of that state and Sri Lanka over the exploitation of marine resources in the Palk Bay. It’ll be extended to all coastal states in near future,” said CIFT principal scientist Leela Edwin.

Longlining is a passive fishing technique that involves use of long mainlines and branchlines with baited hooks. As bottom trawling destroys the marine ecosystem, many countries have banned it. India too has decided to regulate fishing practices.

The Cochin Shipyard has completed sea trial of two boats and four boats are ready for delivery. While there are no standard specifications for boats built by local boat builders, the new design will set the standard for deep-sea fishing boats. The hull and deck  are made of steel, which makes them strong and sea-worthy. It is 100 per cent watertight and has bunkers for eight crew members. Ergonomically designed, the boats have hydraulic steering wheels, customised winches and bio toilets. The diesel-powered boats can achieve eight knots speed and are ideal for three-week long fishing expeditions. It has an insulated stainless steel fish hold and refrigerated sea water system.

Stay up to date on all the latest Kerala news with The New Indian Express App. Download now
(Get the news that matters from New Indian Express on WhatsApp. Click this link and hit 'Click to Subscribe'. Follow the instructions after that.)
TAGS
Kerala Tamil Nadu fisherman