The process of collecting the declaration forms is underway and the department will be able to submit the list by February 20.

THIRUVANANTHAPURAM: As many as 3 lakh farmers from the state are expected to get the `6,000-a-year cash dole announced by the Centre in the Union Budget for small and marginal farmers under the PM-Kisan scheme. The first draft list, chiefly a declaration-based list, would be uploaded to the portal of the scheme on February 20 and the farmers from the state will get the first instalment of `2,000 from February 24 when Prime Minister Narendra Modi officially launches the scheme. Since the scheme has not mentioned any lower threshold limit for the cultivable land, even one-cent landholders from the state are eligible to get the benefit of the scheme, said officials. 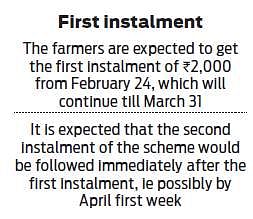 Agriculture director P K Jayasree told Express there are over 12 lakh farmers in the state. However, around 2.5-3 lakh farmers are expected to be eligible for the benefit as per the operational guidelines set for the scheme by the Centre. The department has issued application forms to be filled up by the farmers with a self-declaration and details such as bank account details, details of land, Aadhaar number, tax receipt, etc.

The process of collecting the declaration forms is underway and the department will be able to submit the list by February 20, she said. Though the officials didn’t have time to cross-check the details submitted by the farmers before the formal launch of the scheme, the farmers who apply for the scheme with a self-declaration form would get the benefit now.

But the department would submit a final list by April after vetting the details of the declaration, she said. The state has been giving agriculture pension to around 2 lakh farmers who attained the age of 60 and above.

But the state government made a lower threshold of 10 cents to avail of the pension. So this list cannot be used for the new scheme as it has only the upper threshold of up to 2 hectares cultivable land. Further, the operational guidelines of the scheme have a set of guidelines to get the benefit. Families with taxpayers, serving and retired government staff, professionals like doctors, engineers, lawyers, chartered accounts and architects registered with professional bodies, MLAs and MPs, etc. are not eligible.

Stay up to date on all the latest Kerala news with The New Indian Express App. Download now
(Get the news that matters from New Indian Express on WhatsApp. Click this link and hit 'Click to Subscribe'. Follow the instructions after that.)
TAGS
farmers funds Kerala