He pointed out underemployment remained a major problem in the country than unemployment.

THIRUVANANTHAPURAM:   India is a country with most unequal societies, CPM Polit Bureau member Prakash Karat said while addressing students at the National Students’ Parliament plenary session on ‘Idea of India’ at the ongoing ‘Festival on Democracy’ on Saturday. “There is still a huge economic disparity among the people in the country. This is unsustainable. During the 90s, liberalisation increased the inequalities in the society. It is a threat to the foundation of our democracy. B R Ambedkar had predicted that our country would enter into a life of contradictions. This is exactly what is happening now”, Karat said. 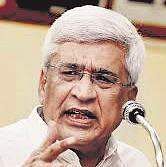 He pointed out underemployment remained a major problem in the country than unemployment. “Our young generation is being paid low for the jobs thus instilling a sense of job insecurity. Our unemployment rate is the highest in the last seven years in the world which is a matter of concern. In this scenario, our Prime Minister is insisting our young generation sell pakkodas “, Karat said.

Referring to the recent SC order, he said he feared the plight of the tribes in the country who face a threat of eviction from the forest land. “It is also a major threat to humanity,” he added. Karat asking for electoral reforms, said, “Money power is ruling the elections. Any person who has money can contest and win in elections. That is the scenario. So we need to have electoral reforms.”

Former Rajya Sabha member and scholar, M P Abdussamad Samadani who spoke in hindi stressed on the need for communal harmony. “The idea of India is a burning topic especially considering the present scenario the country is facing. The idea of India is the celebration of pluralism. We can’t ignore the contribution by the leaders who led the freedom struggle. In fact, the unity of India was inherited from them”, he said.

Swami Agnivesh persuaded youngsters to work for a better India. He also said that the fund given to MPs and MLAs should be stopped and they should pave way for younger generation. Historian M R Raghava Warrier described India’s evolution and historical significance.