Among the five airports won by Adani Enterprises, it quoted the lowest amount for Mangalore and Trivandrum, Rs 168 and Rs 115, respectively.

THIRUVANANTHAPURAM: The Adani Enterprises has won the operational bid for the Trivandrum International Airport on expected lines. The state had made the 'costliest gambling' while putting up a fight to retain the airport in public sector. But despite boasting 'successful and tested' credentials, Kerala failed to put pressure on the Centre and ended up on the losing side.

As per the quotes submitted by the three companies which bid for the airport, Adani (Rs 168) came up with the highest, followed by KSIDC (Rs 135) — which took part in the bid on behalf of TIAL — and GMR (Rs 65). The bids are based on the highest fee per domestic passenger the airport operator has to pay to the Airport Authority of India (AAI) and not on revenue share. 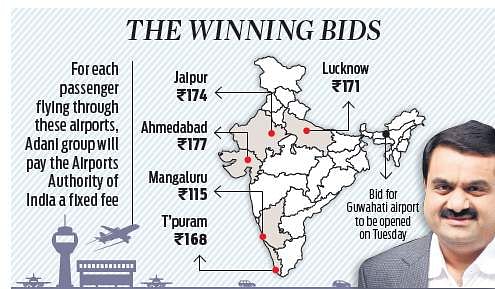 For instance, the winning bidder has to pay a sum of Rs 73 crore as per the estimate of Rs 168 quoted by Adani given the passenger volume of previous fiscal. It saw a total footfall of 44 lakh passengers, including 19 lakh on the domestic sector. The airport has netted a profit of around Rs 170 crore. The fee the airport operator has to pay per international passenger has not been revealed.

Further, if the state is really against privatisation of the airport, it can announce it will not sign the 'state support agreement' with the winner of the bidder which ensures the basic things like water, power, etc required to run the airport. Last time when the Kolkata Airport was put up for sale, the West Bengal Government had forced the Centre to drop the airport from the list by announcing it would not sign the state support agreement.

So the Kerala Government will have to explain to the airport staff, who have been staging a series of protests under the banner of pro-Left Airport Authority Employees Union against privatisation.
Further, it is intriguing why the state was reluctant to allow CIAL to bid for Trivandrum and instead asked it to bid for Mangalore. Trivandrum has always been considered profitable as international passengers outnumber domestic ones while it is vice-versa in Mangalore.

They have no experience, says CM
Reiterating his demand to hand over the Trivandrum Airport to the state government, Chief Minister Pinarayi Vijayan on Monday questioned the successful bid of Adani. “We doubt the Centre has staged a drama in the name of bidding to select Adani. All things will have to be revealed in the coming days,” said Pinarayi, adding that the group has no experience in running airports. He said the state has been running CIAL and can manage Trivandrum Airport, too

Among the five airports won by Adani Enterprises, it quoted the lowest amount for Mangalore and Trivandrum, Rs 168 and Rs 115, respectively. The figure was more than Rs 170 for the other three.GMR, which took part in the bidding for Trivandrum and Mangalore along with three other airports, did not quote a convincing figure and came a distant third with `63 and `18 respectively.Experts said if the quotes of Adani are any indication, there is ample evidence to conclude that it was determined to win the bidding for five airports, although the bid for Guwahati was not opened due to a High Court stay order.

Further, the state government had clearly understood before the opening of the financial bid that it would lose out in the race. So it tactically announced it would hold a black day on Monday and an airport raksha march on Thursday, the day the bid winner would officially be announced and the letter of approval handed over, said an officer close to the AAI.

It is a clear case of corruption that five airports put up for sale were won by the Adani in the competitive bidding. The criteria for taking part in the bidding was deliberately watered down by the Centre in order to help Adani. Further, the Centre which first agreed to give ‘right of first refusal’ to the state later limited it to 10 per cent. It was aimed at helping AdaniKodiyeri Balakrishnan, CPM State secretary

The Centre’s decision to hand over five airports including Trivandrum airport to Adani can be viewed as corrupt mean to rake in huge sum ahead of the general elections. The CPI has decided to raise public sentiments against the move to privatise the Trivandrum airport and thwart the attempt of the Centre
Kanam Rajendran,  CPI state secretary

Stay up to date on all the latest Kerala news with The New Indian Express App. Download now
(Get the news that matters from New Indian Express on WhatsApp. Click this link and hit 'Click to Subscribe'. Follow the instructions after that.)
TAGS
Trivandrum International Airport costliest gambling Airport Authority of India Kerala Government