Kannur Lok Sabha constituency: A big fight on the cards

The Kannur constituency had come into existence in the 1977 elections and in that election, C K Chandrappan of the CPI won the seat by defeating O Bharathan of CPM by 12,877 votes.

KANNUR: Though the district is considered a strong fortress of the CPM, neither CPM nor LDF could claim a monopoly in Kannur Lok Sabha constituency over Congress or UDF, as the constituency had embraced both the fronts many times. Interestingly, the UDF had won the seat on more occasions than the LDF.

During the 80s and till the last election before 2000, in 1999 when A P Abdullakkutty of CPM wrested back the seat for LDF by defeating five-time MP Mullappally Ramachandran, UDF had enjoyed an unchallenged run in the constituency. 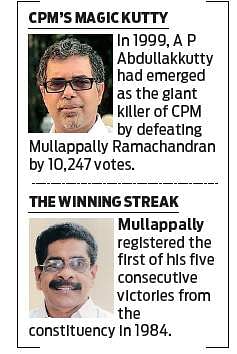 Though both fronts and NDA have not yet announced their candidates for the upcoming election, it has become a certainty that both P K Sreemathi, sitting MP and K Sudhakaran, who had lost the seat to Sreemathi in 2014, will be fielded by their respective fronts.

The Kannur constituency had come into existence in the 1977 elections and in that election, C K Chandrappan of the CPI won the seat by defeating O Bharathan of CPM by 12,877 votes.  In 1999, A P Abdullakkutty had emerged as the giant killer by defeating Mullappally by 10,247 votes. In the next election, he thrashed Mullappally by a margin of 83,849 votes. It remains still the biggest margin of victory registered by a candidate in Kannur.

National issue
Though the CPM will try to discuss the national issues in this election, the UDF will train its guns on the political killings in the region. They will also make a point of the killings of minority youth to negate the minority protection card of LDF. The UDF will try to make the murders of Shuhaib, Ariyil Shukkur and Fazal in the election a poll plank. The anti-people stand taken by the LDF government during the NH development, like Keezhattur and Thuruthi issues will also come alive in the election.

K Sudhakaran
KPCC working president, he will be the UDF candidate as he is also keen to contest. UDF and Congress think Sudhakaran will help them wrest back the seat from the LDF. Satheeshan Pacheni
Another name being considered for the seat is DCC president Satheeshan Pacheni. A P Abdullakkutty
The third name which is doing the rounds is that of former MP and former MLA A P Abdullakkutty. C K Padmanabhan
In all probability, it will be former BJP state president C K Padmanabhan. In a situation in which BJP hopes to increase its vote share, CKP will be its ideal candidate.K Ranjith
Another contender for the seat is former district president K Ranjith, who is the present state cell coordinator and a vibrant young leader.

P Jayarajan
His name was considered in 2 constituencies,  Kannur and Vadakara. But, in light of his name being included in the CBI charge sheet his chances look bleak.

M V Govindan
If Govindan contests, the party believes he can give a tough fight to K Sudhakaran

Stay up to date on all the latest Kerala news with The New Indian Express App. Download now
(Get the news that matters from New Indian Express on WhatsApp. Click this link and hit 'Click to Subscribe'. Follow the instructions after that.)
TAGS
Kannur Lok Sabha constituency Lok Sabha elections Sreemathi