This time the CPM is pulling all its weight to wrest the seat that was taken away by its ally-turned-foe.

KOLLAM: It is once again a do-or-die battle for the RSP and the CPM as the parties fight against each other after five years in Kollam Parliamentary constituency. For the RSP, it was a battle for survival after it shifted base from the LDF to the UDF camp a few months ahead of the 2014 Lok Sabha elections.

The N K Premachandran-factor that tilted heavily in favour of the RSP not only inflicted injury on the LDF but also sent CPM politburo member M A Baby to a sort-of political exile. This time the CPM is pulling all its weight to wrest the seat that was taken away by its ally-turned-foe. The UDF has announced the candidature of  Premachandran much in advance. 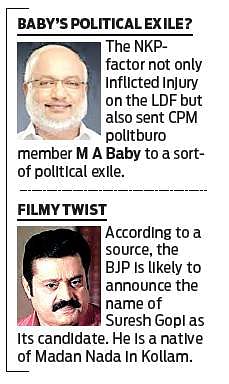 The LDF is likely to field former CPM district secretary and state secretariat member K N Balagopal against Premachandran. “Unlike the previous election, the LDF is in a better position to take on the RSP. The victories in local bodies and Assembly polls have given a tremendous boost for the party,” says a CPM leader. The LDF is ruling most of the local-self government bodies, including the corporation and two municipalities. It has swept all the 11 Assembly constituencies in the 2016 election.

However, Premachandran continues to be a formidable leader with a wide voter base, and it will be a major worry for the LDF. “No one can deny developments that Premachandran have brought to Kollam. Be it the bypass, Punalur-Sengottai broad gauge, the second terminal of Kollam railway station it is there for people to see,” says an RSP leader.

According to him, the CPM had done a futile smear campaign against Premachandran to deny him the credit of the achievements. Though the constituency has been with either the LDF or the UDF since the beginning, the BJP is trying to field a ‘heavyweight’ candidate to spring a surprise.

PM’s favourite poll destination
Prime Minister Narendra Modi has visited Kollam three times in the past five years. The first was to meet the victims of Puttingal temple fire tragedy in 2016. A year later, he came to unveil the statue of former Chief Minister R Shanker. The latest visit was to inaugurate Kollam bypass in 2019. During his last visit, he addressed party workers at a function that set the tone for BJP’s political campaign for the general elections in the state.

Bid to ‘bypass’ credit
Political bickering for claiming credit for various development activities has reached its crescendo with the completion of Kollam bypass. Premachandran accused the LDF Government and the district leadership of the CPM for delaying the inauguration while the CPM made counter-allegations against the MP for making false claims over the project.

N K Premachandran
Seeking third term as Lok Sabha MP, meticulous and popular, seen as the face of the development of Kollam.

Suresh Gopi
A Rajya Sabha member, he is a party man with a star value.

S Jayamohan
A former district panchayat president, strongman of the party from eastern side, currently chairman of KSCDC.

Stay up to date on all the latest Kerala news with The New Indian Express App. Download now
(Get the news that matters from New Indian Express on WhatsApp. Click this link and hit 'Click to Subscribe'. Follow the instructions after that.)
TAGS
Kollam Parliamentary constituency RSP CPM Kollam Lok Sabha constituency