The award for the screenplay is to Muhasin Parari and Zachariya for Sudani From Nigeria.

KOCHI: The State Film Awards declared on Wednesday mostly reflected the popular vibe. The only surprises in the list of winners are ‘Kanthan the Lover of Colour’ and second best film ‘Oru Nyarazhcha’ directed by Shyamaprasad, who is also the best director. The best film award winner ‘Kanthan The Lover of Colour’ narrates the tale of a 10-year-old boy Kanthan and is directed by Shareef Easa.

Meanwhile, it is also interesting to notice that the rest of the award winners were selected for their contributions in mainstream cinema. Movies like Sudani From Nigeria, which excelled in the State awards had already won some of the other popular awards. The movies Sudani From Nigeria, Joseph, and Carbon were some of the widely discussed movies in the Cinema Paradiso Club, the popular Facebook community of movie lovers in Kerala. The jury, while judging the movies, also gave consideration to the popular sentiment, which is a good sign. This will also help in bridging the gap between mainstream and art/parallel cinema.

The best actor award was shared between Jayasurya and Soubin Shahir. While Jayasurya’s portrayal of V P Sathyan in ‘Captain’ and as a transwoman in ‘Njan Marykutty’ helped him bag the award,  it was the role of Majeed, a manager of a local football club in Malappuram, that helped Soubin to get the award. Best actor in a character role is Joju for the title role in Joseph, the sleeper hit of 2018.

The best cinematographer award went to K U Mohanan for the visuals in Carbon. Bollywood music director Vishal Bhardwaj won the award for the best music director for the same movie.  The most popular tone of 2018- ‘Jeevamsamaayi...’ from Theevandi helped Harinarayan in winning the best lyricist award while another popular number Poomuthole from Joseph helped Vijay Yesudas bag the best male singer award.

The award for the screenplay is to Muhasin Parari and Zachariya for Sudani From Nigeria.  Ronex Savier who won the award for makeup, Sameera Sanesh who got the best costume designer award and Shammy Thilakan, who won the dubbing artist award for Odiyan, are the other popular faces who were selected for the awards. 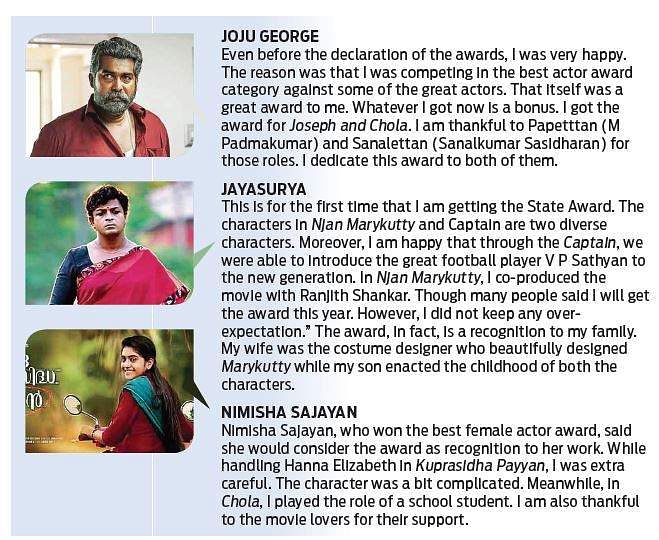