Facing the election for the third time after the formation of the constituency, the UDF holds an upper hand in the ensuing electoral battle in Pathanamthitta.

PATHANAMTHITTA: Facing the election for the third time after the formation of the constituency, the UDF holds an upper hand in the ensuing electoral battle in Pathanamthitta.Spread over two districts, the constituency consists of Poonjar and Kanjirappally in Kottayam and Tiruvalla, Adoor, Aranmula, Konni and Ranni in Pathanamthitta, the elections in 2009 and 2014 saw a cakewalk for the UDF.

With the changed political atmosphere in the aftermath of the Sabarimala issue centered around the Supreme Court verdict and the agitation thereof, the electoral scenario will have a major impact on the voters.

The government’s handling of the August floods, which claimed more than 20 lives and sufferings to thousands of families, drew widespread criticism from people across the district.The CPM candidates who contested the last two elections - K Anandagopan in 2009 and Peelipose Thomas as CPM Independent in 2014 - failed to make their presence felt in the elections.Congress candidate Anto Antony won on both occasions, with over 1 lakh votes in 2009 and  56,191 in 2014.

Going by the political undercurrents, the LDF is planning to hand over the candidature to the Democratic Kerala Congress led by former MP Francis George.In such a scenario, the party chairman who represented the erstwhile constituency before the delimitation of the constituency, is the likely choice.

In the UDF, Anto, the sitting MP who has close links with the party central leadership, especially with its president Rahul Gandhi, will be the frontrunner.Anto was in the core team of MPs in Rahul’s recent trip to the UAE.

For the NDA, M T Ramesh, who unsuccessfully contested in 2014, has already come out with his candidature for the March-April election.Closely associated with the RSS and BJP’s central leadership, Ramesh is pinning hopes on contesting polls again. 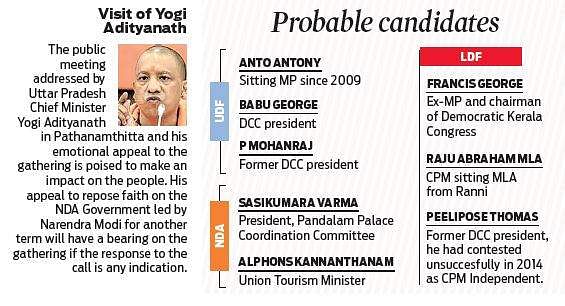 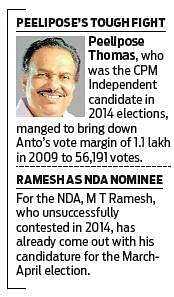