Freezing Kerala: Chilly weather to continue for another five days

While Munnar reported minus 3 degree Celsius, several parts of the state, including Sabarimala and some pockets in Kottayam, recorded 17 degree Celsius.

While Munnar reported minus 3 degree Celsius, several parts of the state, including Sabarimala and some pockets in Kottayam, recorded 17 degree Celsius. To be sure, this sudden spell of chilly weather condition is not a Kerala-only phenomenon. Many parts of north India are currently under the grip of extreme cold weather, and this is the reason for the cold weather conditions in most parts of Kerala, say weather experts.

The minimum temperature in Delhi, for instance, is ruling at 9.2 degree Celsius even as the night temperature in Leh went as low as minus 4.3 degree Celsius. In Himachal Pradesh, mild snowfall was reported in high-altitude tribal areas, mountain passes and key tourist resorts, causing sharp fall in day temperatures.

Pune, in fact, recorded the coldest December since 1981 last month when the mercury plunged to 5.9 degree Celsius on December 30. Other parts of Maharashtra too reported extreme cold conditions – Nagpur (3.5 degree Celsius), Nashik (5.1 degree Celsius) and Malegaon (5.4 degree Celsius).
“The three months from December to February, there is a fall in minimum temperatures. Moreover, North India is going through a severe winter now. From there, dry northerly wind is coming to Kerala. That’s why we are experiencing cold weather conditions in Kerala,” said K Santhosh, director, India Meteorological Department (IMD), Thiruvananthapuram. 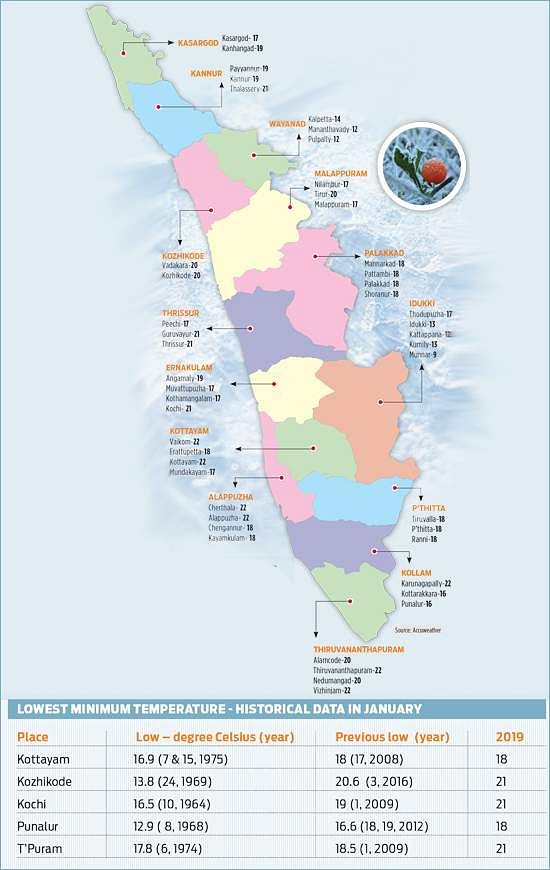 According to him, the main reason for the sudden dip in mercury is the change in wind speed. “From December 31, there has been a big change in the dry winds coming from the northern parts. Extreme cold weather conditions are prevailing in Delhi and other parts. We are receiving the cold winds from these northern regions, which is very dry. The reason for the dryness is that the winds come via the Western Ghats. Whatever moisture that the wind has is absorbed by the Western Ghats,” he explains.

The evaporation rates have also gone up along with the wind speed, bringing down the relative humidity in Kerala, says ACCER’s Mukundan. The evaporation rates, which were 3 mm/day, has gone up to 5-6 mm/day, while the wind speed increased from 3-3.5 km/hour to 9-10.5 km/hour in the past few days. “Relative humidity is where drastic change has happened. The humidity levels, which stood at 50-60 per cent, has come down to 30 per cent.

This phenomenon usually happens in Kerala in January and February. During this period, water will be sucked up from the atmosphere, from the earth etc,” Mukundan says.  M G Manoj, research scientist with the Advanced Centre for Atmospheric Radar Research Centre at Cusat, says the current spell of cold weather won’t be a recurring phenomenon every year, but it is likely to happen every 3-5 years. “We had seen severe cold weather of such intensity back in 2008,” he says.

Stay up to date on all the latest Kerala news with The New Indian Express App. Download now
TAGS
Kerala winters Winters in Kerala climate change