The Air India Express, the low-cost arm of the national carrier, will be flying with full bench of desi pilots in a few months after phasing out the entire foreign crew.

THIRUVANANTHAPURAM: The Air India Express, the low-cost arm of the national carrier, will be flying with full bench of desi pilots in a few months after phasing out the entire foreign crew. The national carrier Air India has not hired any expats/foreign pilots during the past three years. However, the Air India Express has hired as many as 63 foreign captains/pilots during the past three years, with 29 in 2016, 23 in 2017 and 11 in 2018.

According to the data available with the Union Civil Aviation Ministry, the AIE has a strength of 334 Indian pilots till 2018. However, around 16 Indian pilots were upgraded as pilots-in-command from January to September 2018. The same period saw 11 foreign pilots being phased out. Speaking to Express, a senior officer with the AIE confirmed the carrier would be holding its flight service with cent per cent desi pilots from this year itself. 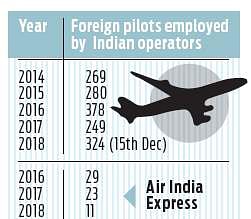 “We have an in-house mechanism to upgrade the Indian pilots to pilots-in-command. At present, there are only less than 10 foreign pilots who will be phased out this year itself. Recruiting and managing foreign crew is a cumbersome process. Further, the local crew are more economical and reliable in terms of emoluments,” he said, adding the AIE has been recruiting foreign pilots mainly from the East European countries on a two-year contract basis.

“According to a source, the rich pool of talent in the foreign crew will always scout for big brand companies and relatively low-profile foreign crew opt for low-cost airlines in the third-world countries. While we have enough talent and more youths enrolling into the aviation field - backed by many flying schools, there is no need to rely on foreign crew,” he said.

Further, all the scheduled and non-scheduled airlines have been advised to develop their own in-house strength to reduce the dependency on the foreign pilots. The Ministry of Civil Aviation has requested all airlines to submit their phase out plan of foreign pilots periodically, although the government has recently extended the use of foreign pilots by Indian carriers up to December 31, 2020, in view of the shortage of the type rated pilot-in-command/instructor/examiner in the country.

Now we are on Telegram too. Follow us for updates
TAGS
Pilots Desi Air India