The KSEB has formed a group to update the operational strategy for major reservoirs by reviewing the rule curves.

KOCHI: Facing brickbats for alleged poor management of dams during the mid-August flood in 2018, the Kerala State Electricity Board (KSEB) has formulated ‘rule curves’, fixing strategic water levels to be maintained on each date during the six-month-long monsoon period.
In the backdrop of the 2018 flood, the Central Water Commission (CWC) had suggested a review of the rule curves of all the reservoirs in Kerala. The rule curves need to be meticulously drawn, particularly for the reservoirs having a live storage capacity of more than 200 million cubic metres, to create some dynamic flood cushion for moderating the flood, especially during the early days of monsoon, said a report approved by the KSEB.

The KSEB has formed a group to update the operational strategy for major reservoirs by reviewing the rule curves. The rule levels for major dams, including Idukki, Idamalayar, Kakki, Banasurasagar and Sholayar, were finalised by the committee based of the recommendations of the CWC. 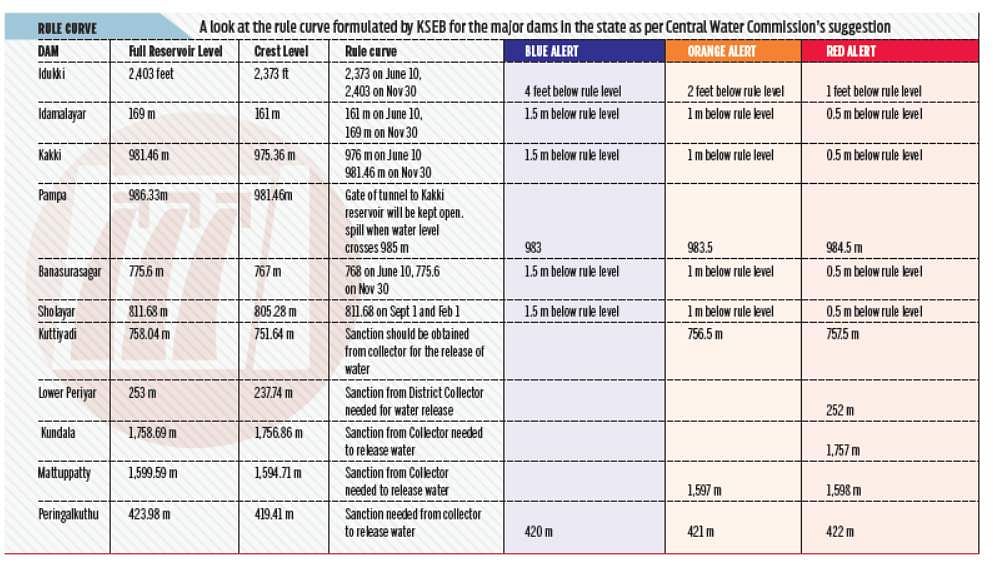 “The Emergency Action Plan is not a system for flood management. It has been formulated to ensure precautionary measures to avoid loss of life and property in the downstream areas in the eventuality of a dam breach. It has been formulated according to the recommendations of the CWC. Though it not for flood management, the board will follow the procedure while releasing water from the dams during intense rain. It will be distributed to all stakeholders, including district collector, local bodies, Irrigation Department and the police. The stakeholders will have to initiate steps for the evacuation of people based on the action plan,” KSEB chairman N S Pillai told Express.

The KSEB had suffered a loss of around `150 crore during the 2018 flood as flood water entered the powerhouses of many projects, including Lower Periyar, Peringalkuthu, Ranni-Perunadu, Vellathooval and Adyanpara Small Hydro Electric Project, causing damage to the generators.
Though Kerala was considered less prone to flooding due to its undulating terrain, the 2018 flood inundated 86 per cent of the state, revealing its vulnerability in the face of extreme weather events. The state receives more than 3,000 mm rainfall a year but its natural landscape helps avoid flooding as its terrain consisting of the high ranges, midlands and coastal plains ensures safe draining of water.

Stay up to date on all the latest Kerala news with The New Indian Express App. Download now
TAGS
KSEB monsoon Kerala