The IMD has made a forecast of an increase of 0.5 degree to 1 degree in temperature for this entire summer season.

THIRUVANANTHAPURAM: The Indian Meteorological Department (IMD) and Kerala State Disaster Management Authority (KSDMA) has locked horns over summer temperature predictions with both the agencies providing contrasting forecasts. The IMD has made a forecast of an increase of 0.5 degree to 1 degree in temperature for this entire summer season and with almost same variation for the next one week, while the KSDMA predicted that Kerala will witness an unusual rise of 8 degree Celsius in some places on March 5 apart from a departure of 2-4 degree from normal.

Both agencies have accused each other, claiming that their forecast is true and that the other’s cannot be trusted. The IMD forecast from Delhi made it clear that the 2019 March-May season average temperatures are likely to be normal over most of the subdivisions except a few subdivisions of Northwest India, Northeast India and southern part of west-coast where above normal temperatures are most likely. 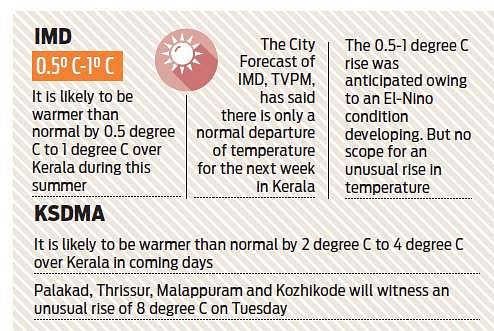 More precisely, it said that the season averaged maximum temperatures in Himachal Pradesh, West Rajasthan, Konkan, Goa, Coastal Karnataka, Kerala and Arunachal Pradesh and are likely to be warmer than normal by 0.5 degree C to 1 degree C.

Whereas the KSDMA in its official web page forecasted that the state will witness a rise of 2-4 degree C in coming days and the districts like Palakad, Thrissur, Malappuram and Kozhikode will witness an unusual rise of 8 degree C on Tuesday against the long period average. Interestingly, the forecast was made based on weather models released by the IMD in its summer prediction.

K Santhosh, director of the Met Centre, Thiruvananthapuram, told Express the 0.5-1 degree C rise was anticipated owing to an El-Nino condition developing. But there is no scope for an unusual rise in temperature as predicted by some agencies, he said, adding people will have to heed only the officials prediction of the government agency IMD. There is no need to take extra precaution based on the bulletins circulated by some agencies in various platforms, he said.

But, Sekhar L Kuriakose, member secretary, KSDMA, said it has made the forecast based on the IMD weather models. “We have enough reasons to go ahead with our own prediction based  on the IMD weather models and the agency had not received any credible forecast from the government agency during the time of August flood and Ockhi. The IMD has not made adequate observatories in the state and in the wake of its failures in alerting the state on time during calamities, the state has decided to join hands with ISRO to get better weather models,” he said.