Though Kerala receives 70 percent of the annual rainfall during the South-West Monsoon, the state lacks the infrastructure to store the water for use during the summer season.

KOCHI: Though the state received excess rainfall during the initial days of the South-West Monsoon, the climatic changes triggered by the devastating flood have triggered a drought-like stress condition in four districts. According to weather watchers, the state is experiencing an unusually hot summer with many places recording a departure of 3 - 3.5 degree Celsius compared to the normal temperature recorded during this season in the past.

“Four districts - Kasargod, Palakkad, Thrissur and Kollam - have recorded more than 25 per cent deficient rain during the October-February season. The rivers, the lifeline of these districts, are fast drying up and there is a steep depletion in the ground water level. If the summer rain, which contributes 13 percent of the annual rainfall, fails to deliver, it will lead to severe drought,” Kerala Centre for Water Resources Development and Management (CWRDM) Geomatics Division head and senior principal scientist V P Dinesan told Express. 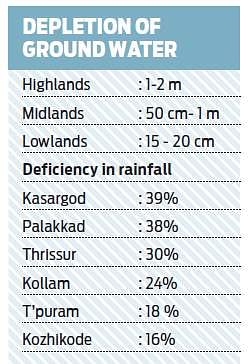 Though Kerala receives 70 percent of the annual rainfall during the South-West Monsoon, the state lacks the infrastructure to store the water for use during the summer season. “The North East Monsoon and summer rain together contribute 30 percent of the annual rainfall, which helps us tide over the water crisis during summer  season. The rate of evaporation is high these days due to the hot conditions and a sizeable quantity of water is lost due to this,” he said.

If the summer rains fail to replenish the ground water resources, the situation in these districts can turn grave. Kerala is geographically divided into three regions. The eastern highlands, which feature mountainous terrain, the central midlands with its rolling hills, and the lowlands, which form the coastal plains, play a crucial role in maintaining the climate. Due to the deficient rainfall after the floods, the highlands reported a depletion of 1 - 2 m in ground water level, while the midlands recorded a decline of 50 cm to 1 m.