The interesting part is that none of the three political fronts has decided which constituent party will be contesting in Kottayam.

Traditionally, Kottayam is known as the bastion of UDF. Being the birthplace of Kerala Congress party, Kottayam Parliament constituency stood by Right-wing parties nine times in the 15 Lok Sabha elections held since 1957. However, with occasional victories, the Left has also proved it is a political force to be reckoned with. Interestingly, in its six electoral victories in Kottayam, K Suresh Kurup of CPM was the LDF candidate four times.

A range of issues, including crisis in the agricultural sector, especially fall in price of rubber, price rise of petroleum products, GST implementation, demonetisation and Sabarimala issue, is capable of making a significant impact on election results.

“We are confident the UDF will win this election as Kottayam is basically a UDF constituency. The voters will definitely cast their votes against the anti-people rule of the Centre and the state government,” said Tomy Kallani, former DCC president and election committee chairman of Jose K Mani in 2014.

Meanwhile, the LDF is pinning its hopes on the development initiatives of the state government, especially the CIAL-model company announced for Kottayam in the state budget to address the crisis in rubber farming sector as well as the unprecedented development projects implemented at the Government Medical College Hospital, Kottayam. According to CPM district secretary V N Vasavan, the political climate is favourable for the LDF.

Sabarimala issue is the key poll plank for the NDA. The BJP and team are confident with their systematic and organised plans for the election. “We have organised schedules and plans which are being developed at the Centre in the run-up to the election,” said BJP district president N Hari.

The interesting part is that none of the three political fronts has decided which constituent party will be contesting in Kottayam. 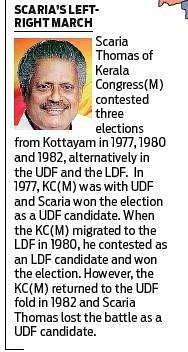