In 2004, Ponnani was the lone seat with the UDF while its candidates lost in 19 seats in the state. E Ahamed won the seat by a margin of around 1 lakh votes.

Since 1977, IUML has been enjoying a cakewalk in Ponnani. The Muslim-dominant constituency was Left lenient in 1962, 1967 and 1971 general elections. In 1977, IUML national leader G M Banatwala wrested Ponnani where he enjoyed landslide victory for seven times, while another national leader Ebrahim Sulaiman Sait sailed to an easy win in 1991. Former Union Minister E Ahamed won the seat in 2004. Sitting MP E T Mohammed Basheer retained Ponnani in 2009 and 2014.

UDF owes much to Ponnani as the constituency helped its candidates enjoy victory even when its traditional strongholds took a turn in favour of the LDF. In 2004, Ponnani was the lone seat with the UDF while its candidates lost in 19 seats in the state. E Ahamed won the seat by a margin of around 1 lakh votes.

“For the UDF, the contest assumes much significance. Ponnani is our pride and we will leave no stone unturned to retain our bastion,” said an IUML leader.

IUML, according to a source within the party, will field sitting MP ET Mohammed Basheer. The LDF is yet to start discussions surrounding candidates and the front is expected to go for Niyas Pulikkalakath and Tanur MLA V Abdurahman citing Independents will help the front garner Congress and anti-IUML votes.

The BJP neither has a strong presence nor significance in the constituency. But, the politics of Sangh Parivar will control the narrative of the campaign. Anti-fascist rhetoric will rule the roost if the current trend is taken into account. The LDF has started campaign highlighting its anti-BJP policies while the UDF is also expected to go for the same motto. Anti-Malappuram statements by LDF leaders will be also be highlighted by the UDF during the campaign. 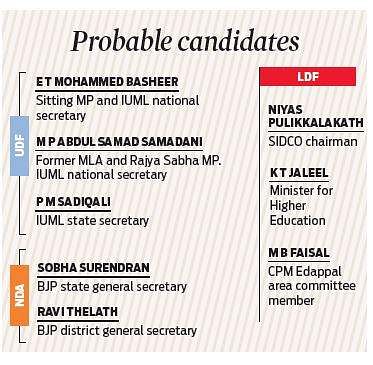 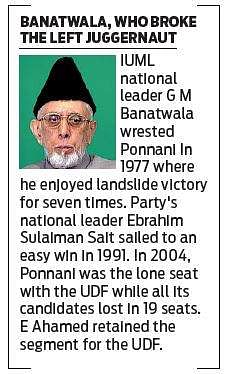