According to sources, the JD (S) meet decided to demand a winnable seat and the party is planning to stake claim on Vadakara, Ernakulam or Thiruvananthapuram.

KOCHI: The state-level leaders’ meet of the Janata Dal (Secular), a constituent of the ruling LDF, decided to stake claim on one Lok Sabha seat. The meeting held at YMCA Hall in the city also authorised four senior party leaders to hold talks with the LDF leadership in this regard. 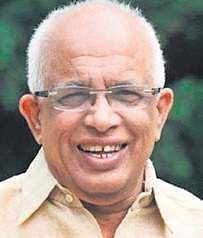 They are: Water Resources Minister K Krishnan Kutty, former minister Mathew T Thomas, A Neelalohithadasan Nadar and C K Nanu MLA. After the LDF decides on the seat, the parliamentary party will meet and select a candidate, said Minister Krishnankutty.

The JD (S) was allotted Kottayam seat by the LDF in 2014 Lok Sabha elections and former minister Mathew T Thomas had contested unsuccessfully against KC (M) candidate Jose K Mani, who won by a margin of 1.20 lakh votes.

According to sources, the JD (S) meet decided to demand a winnable seat and the party is planning to stake claim on Vadakara, Ernakulam or Thiruvananthapuram.

The meeting also decided to conduct workers’ convention in all Assembly constituencies and form election committees before February 15. It was decided to seek the intervention of Union Government to direct scheduled banks in Kerala to avoid coercive steps against farmers for loan recovery.

Minister K Krishnankutty informed the JD (S) state leaders’ meet that he has written to the party national leadership seeking permission to step down as the president of the party state unit. “As he was sworn in minister on November 26, he was finding it difficult to discharge the duties of the party state president,” party senior leader Jose Thettayil told Express.