MB Rajesh, who has won the seat two times for the LDF, will most probably be the candidate once again, unless the party decides to cap the chances of candidates to two times.

By A Satish
Express News Service

As most of the surveys predict a dismal show for the LDF in the forthcoming Lok Sabha elections, the only silver lining could come in the form of victory in both the Palakkad and Alathur Lok Sabha constituencies.

One of the disadvantages for the UDF could be a resurgent BJP which already rules Palakkad municipality and came second in both the Palakkad and Malampuzha Assembly constituencies. BJP national president Amit Shah had already sounded the poll bugle for Kerala from the Fort Maidan in Palakkad by mentioning the development projects and the contribution of the Centre towards it.

The UDF had its fingers burnt badly last time by bringing in an outsider and that too from the SJ(D) - M P Veerendra Kumar. 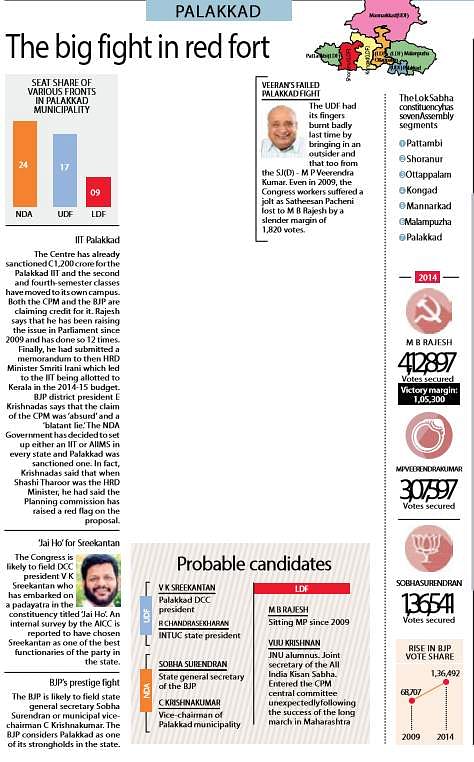 The Congress workers were peeved as Satheesan Pacheni of the Congress was defeated by M B Rajesh in 2009 by just 1,820 votes.  The UDF bungling led to M B Rajesh increasing his victory margin to 1,05,300 votes.

In the 2016 Assembly elections, of the 12 segments nine of them are with the LDF. Only Shafi Parambil and V T Balram of the Congress and N Shamsudheen of the IUML represent the UDF in the district.
Rajesh had won the seat two times for the LDF and most probably he will be the LDF candidate unless the party decides to cap the chances of candidates to two times.

“The members of the CPM state secretariat had repeatedly contested the elections and become ministers and therefore they cannot selectively impose such conditions only on Lok Sabha candidates,” said a CPM insider.

Rajesh has released his report card which mentions the IIT Palakkad, Passport Seva Kendra, dialysis and cancer care facilities at Ottappalam, the decision of the state government to take over Instrumentation Limited (IL) when the Centre decided to close it, preventing disinvestment of BEML and improving road connectivity to the remote oorus of Attappadi.