While Congress has vowed to recapture lost ground, while the CPM parliamentary committee has voiced its displeasure against over fielding Innocent again.

CHALAKUDY:  The electorate in Chalakudy, the constituency that carries the legacy of erstwhile Mukundapuram, a traditional UDF fortress, has never been lenient towards the leftist ideology. But the changing political milieu has provided space for the LDF elements to upset the UDF applecart. 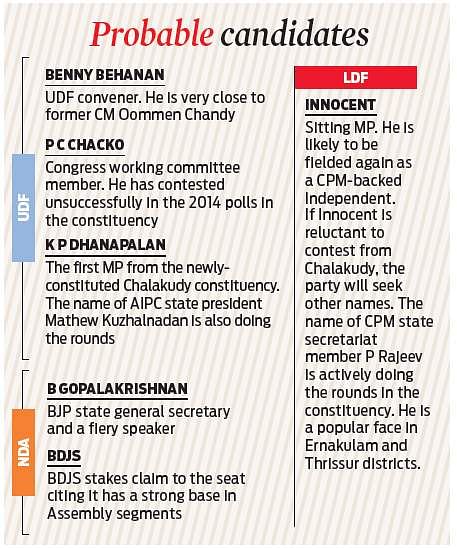 The Congress has won Mukundapuram 10 times since 1957 but the constituency also boasts of scuttling the dreams of stalwarts. In 2014, actor Innocent, the CPM-backed Independent, emerged a giant killer by defeating senior Congress leader P C Chacko with a comfortable margin of 13,884 votes. Innocent is the first film personality from the state to enter the Lok Sabha.

This time, the Congress has vowed to recapture lost ground, while the CPM parliamentary committee has voiced its displeasure against over fielding Innocent again. A popular face in the Assembly segments in Ernakulam and Thrissur, the name of P Rajeev is doing rounds as his native place comes under Kodungallur constituency.

Caste and community equations always override political equations in the selection of candidates here and hence both the party leaders are burning the midnight oil to choose the right candidate. Earlier, Kerala Congress (M), a constituent of the UDF, which was seeking an additional seat apart from its traditional fiefdom of Kottayam, has staked its claim for Chalakudy. It has cited the victory of K Mohandas of Kerala Congress(J) from the Mukundapuram seat in 1984 and KC leader P J Joseph cited this history to substantiate its claim.

Nambadan’stryst with the constituency
Former minister Lonappan Nambadan, who was affectionately called  Nambadan Mash by his supporters, was the last one to represent Mukundapuram constituency in Lok Sabha. He defeated K Karunakaran’s daughter Padmaja Venugopal by a margin of 1,17,097 votes in 2004. It was for the first time Nambadan Mash, who was known for his quirky oratorical skills in the Assembly, where he was a member for about 25 years, contested in LS polls. A former Kerala Congress legislator and then an LDF-backed Independent, Nambadan tried his luck in Mukundapuram on the CPM’s official symbol.