Return of the natives and making fortune on homeland

NORKA CEO K Harikrishnan Nampoothiri said the plan is to extend more help to the the returnees as job sector in the Asian countries has become insecure.

ALAPPUZHA: When Abdul Nazeer returned to Chekkilodu in Kozhikode 18 months ago, after spending a good part of his life as a driver in Riyadh, Saudi Arabia, he knew he would feel the pinch but did not expect it to be so bad. All his savings finished in a few months and though Nazeer bought a pick-up van to eke out a living, it did not give him the desired money. It was then he came to know about the NORKA Department Project for Returned Emigrants. Thanks to it, he started a business of renting out equipment used in construction sector. It became successful in six months.

“We’re now leading a peaceful life and plan to expand the business. NORKA gave Rs 8.5 lakh as loan to start the business and I arranged another Rs 2 lakh. I purchased various machines used in the construction field and started renting them out. I’ve found the demand is even higher now and plan to buy more equipment,” said Nazeer.

The loan scheme introduced in 2014 is a big support to the returning Keralites, with `134.7 crore being distributed so far. A total of Rs 27.09 crore was given as subsidy and Rs 2.32 crore as interest subsidy. Now NORKA plans to extend the network to people returning from all Central Asian countries. NORKA CEO K Harikrishnan Nampoothiri said the plan is to extend more help to the the returnees as job sector in the Asian countries has become insecure.

NORKA CEO K Harikrishnan Nampoothiri said: “We started the campaign on loan scheme through nationalised banks’ branches within the country and beyond. Agreement was signed with banks as well as financial institutions.”

The maximum loan amount is Rs 30 lakh and a subsidy of 15 per cent of the capital as well as interest subsidy will be allotted to the loan holders.

Mattancherry resident Govindan Nampoothiri said NORKA is not acting for the welfare of the people. “NORKA is misusing government fund for arranging meetings in Gulf countries. Only 776 people got job in Gulf countries last few years through the NORKA portal,” he said. 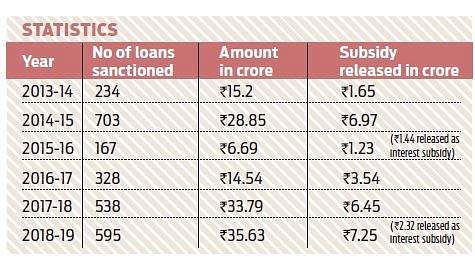 Stay up to date on all the latest Kerala news with The New Indian Express App. Download now
TAGS
Chekkilodu Kozhikode