In its affidavit, the ASI also requested to maintain the status quo at the church.

KOCHI: The building of Eraviperoor Immanuel Mar Thoma Church in Pathanamthitta is undoubtedly a heritage structure and has all the features of traditional Kerala architecture, even though the facade of the church was renovated and reconstructed at a later period, said Archaeological Survey of India (ASI) in its submission before the High Court. 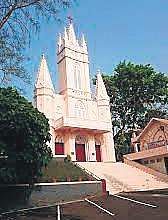 In its affidavit, the ASI also requested to maintain the status quo at the church. The affidavit was filed on a petition filed by Eraviperoor Immanuel Mar Thoma Palli Samrakshana Samithi,  which sought a directive to the church management to desist from demolishing it. The Thrissur Circle of the ASI had inspected the site on a directive from the court.

The report said the church has a diminutive altar and nave, which is one of the patterns of church construction in Kerala that prevailed during the 15th to 17th centuries. This pattern is also similar to the St Mary’s Church, Kanjirappally, which was constructed during the 15th century.

The diminutive altar has a vaulted roof, which was a feature of the early churches in Kerala. The church also has a wooden balcony, which is rarely seen in churches from 17th to 18th centuries onwards, the submission said.The thick wall of the altar and nave also shows the church structure is indeed old. The beams and wooden balcony are rare examples of church architecture in Kerala.

Stay up to date on all the latest Kerala news with The New Indian Express App. Download now
TAGS
Archaeological Survey of IndiaKerala ChurchEraviperoor churchheritage monument