Former Additional Chief Secretary (Revenue) P H Kurian, said for getting a more accurate weather forecast, it is also essential to make use of the advanced radar imaging satellites.

THIRUVANANTHAPURAM: On March 2, the Kerala State Disaster Management Authority (KSDMA) warned Kerala would witness an unusual rise of 8 degree Celsius in some places especially Kozhikode on March 5 apart from a departure of 2-4 degree from normal. At the same time, the Indian Meteorological Department (IMD) has made a forecast of an increase of 0.5 degrees to 1 degree in temperature for this entire summer season and with almost same variation for the then ensuing week. Both agencies were wrong.

The accuracy of the weather forecast is a matter of concern lately in the state with Kerala witnessing frequent extreme weather conditions like drought, heatwave, high-intensity rainfalls, floods, forest fires and high-intensity sea erosions, impacting human life and biodiversity.

After the August floods which saw the KSDMA and IMD accusing each other over the accuracy of predictions, the IMD submitted a proposal for setting up 100 automatic weather stations across the state to better prepare and provide a precise forecast to the people.

However, the state is yet to prepare better to issue reliable information on the weather forecast to the people, even as it has taken up a host of mitigation and adaptation projects in key sectors. According to K Santhosh, director of the Met Centre, Thiruvananthapuram, the process to set up the automatic weather stations is under way. It is the state government that has to provide the land for setting up the new weather stations, and the IMD would be installing the instruments once the site is identified for each station, he said. 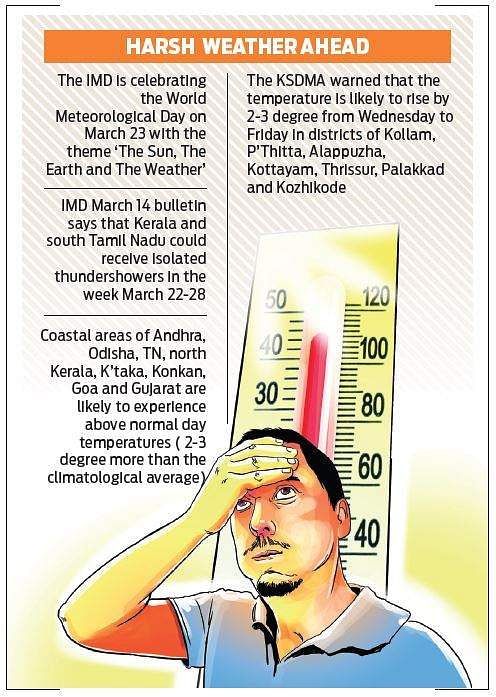 Sekhar L Kuriakose, member secretary, KSDMA, said: “It is true that the agency based on the weather model of the IMD had warned that the state would witness an unusual rise of 8 degree Celsius. However, when we realised the weather model was a mistake, we have taken up the matter with the IMD DG, and they immediately removed the weather models from the web site. We are not the experts at making a weather forecast. What we have been doing is taking measures or advising people in the light of the weather models issued by the IMD.”

“This is not the first time the system has erred. After the flood, we decided to use ISRO for weather forecast and asked the premier agency to reactivate its 69 weather stations across the state, which were not operational for quite some time due to various reasons. This doesn’t mean that we have stopped subscribing the weather models of IMD. We are looking for a second opinion in matters related to the weather, and the KSDMA will be holding a detailed meeting with ISRO in April to reactivate its weather stations.”  In the meantime, KSDMA would complete the process of identifying the site for setting up 100 automatic weather stations across the state.

Though the entire process could not be completed before the onset of next monsoon, the agency is hoping that both reactivating the ISRO weather stations and equipping more IMD weather stations can be completed in a year.  Further, the process of setting up weather stations at ten pilgrimage centres and 39 rain gauges is underway, he added. Former Additional Chief Secretary (Revenue) P H Kurian, said for getting a more accurate weather forecast, it is also essential to make use of the advanced radar imaging satellites.

Palakkad: A middle-aged man suffered sunburn at Kullakalloor on Wednesday. Saidalvi, 50, of Natiamangalam Kurupath, was going home via Etakadavu bridge when he experienced a burning sensation on his forehead. When he went to a hospital, the doctors certified it as a case of sun burn.