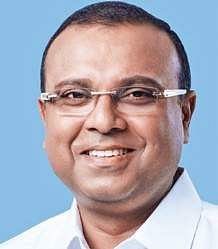 Stay up to date on all the latest Kerala news with The New Indian Express App. Download now
TAGS
K S Radhakrishnan