THIRUVANANTHAPURAM: The crisis in Jet Airways has hit the flight movements from the state with the airline grounding all the flights from the state, including Trivandrum, Cochin and Calicut airports. According to a senior official, it had two daily flights from Trivandrum airport - one international and one domestic. The flight to Saudi Arabia from Thiruvananthapuram had  already been cancelled before the crisis set in and the lone domestic flight on the Thiruvananthapuram-Mumbai route has been cancelled due to some operational reasons.

But the airline is hoping to resume the service in April, said the officer. In Kochi, the airline had been operating 13 flights per day with daily international flights to overseas destinations like Muscat, Sharjah, Abu Dhabi and Dammam and four daily flights to Mumbai and one flight to Delhi. After the crisis worsened, the airline grounded all the flights from Cochin airport, said a senior officer of Cochin International Airport.

An official close to Calicut airport also confirmed the lone Calicut-Mumbai flight, which had been operational, has also been stopped. The airline had earlier stopped its Doha-Calicut, Dammam-Calicut and Calicut-Bengaluru flights.

Meanwhile, airfares have soared after the ban on the Boeing MAX aircraft coupled with the grounding of Jet Airways planes and the cancellation of flights of Indigo due to pilot shortage.Speaking to Express, travel agents have confirmed they have stopped taking bookings of Jet Airlines as there is no certainty over when it would start operations.

Following the ban imposed on Boeing MAX aircraft, grounding of Jet Airways planes and the cancellation of flights of Indigo, the airfare in domestic routes has also swelled by 30-35 per cent from the state and this would further escalate by the first week of April when vacation begins. There is also a marginal increase in the international routes in proportion to the domestic air fare, they said. 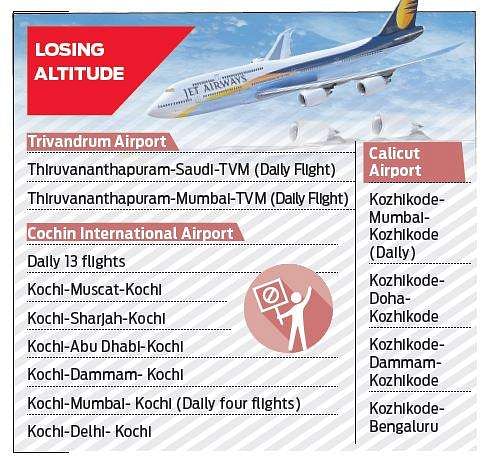 Stay up to date on all the latest Kerala news with The New Indian Express App. Download now
TAGS
Jet airways flights grounded